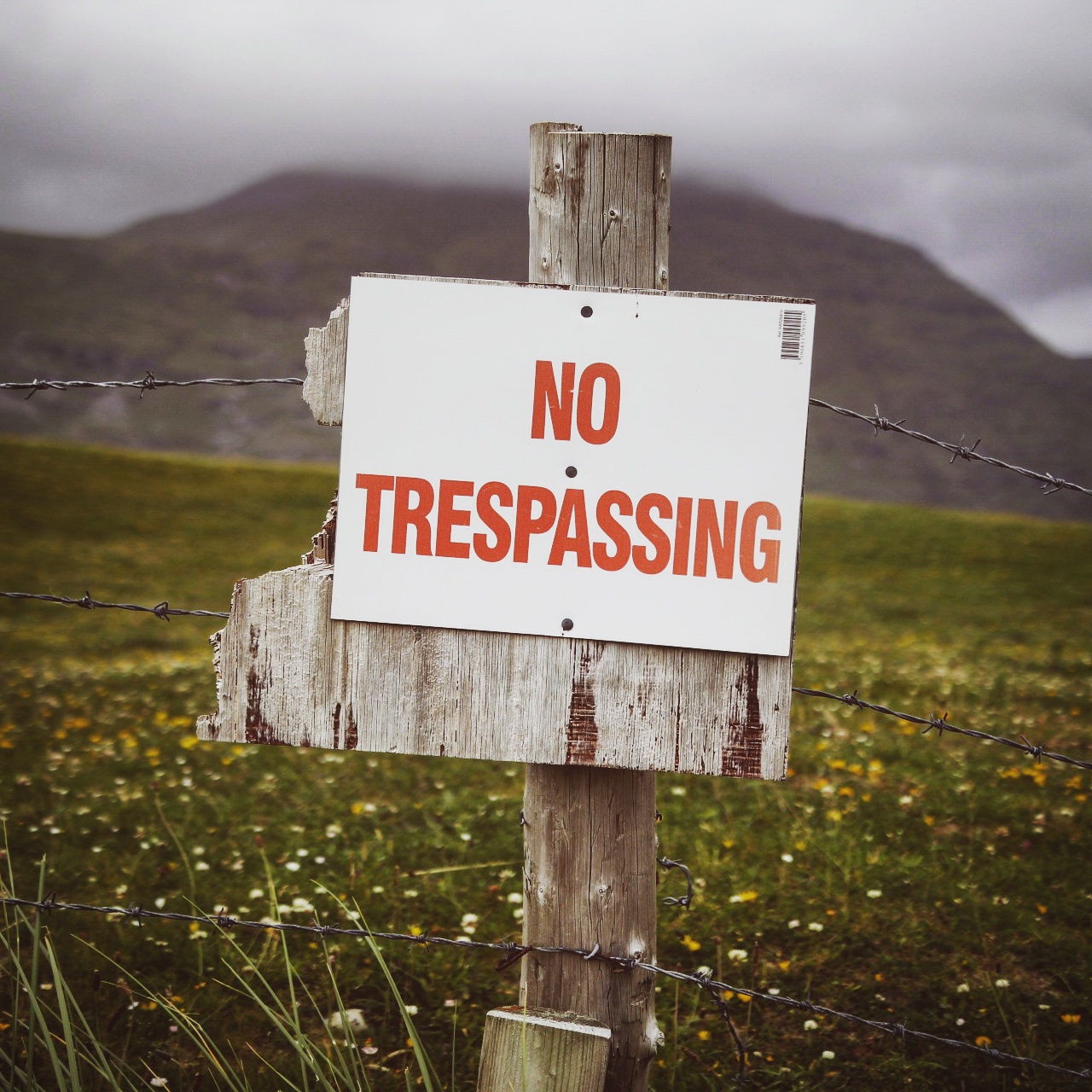 When I lived out in the village near the mountains I would go hiking by the swift river, over the soft bogs, and up the rocky slopes, weather and work permitting.

I got to know the most popular routes and the ways onto and off them, and some of these ways on and off crossed over farmland or old rights-of-way.

On one Sunday morning during a cool June, I pulled on my toughest boots, slung a bag with a bottle of water and my camera over my shoulder, and headed out towards the hills, along a disheveled narrow boreen between fields where cows patiently clipped the summer grass.

When I reached the end of the road, the little offshooting path that I normally then switched to was blocked off by a web of wire and bailing twine, with a sign hung between the strands, bobbing in the breeze, saying “KEEP OUT!” in big red letters. A little further back, a sturdier sign on a post sunk in the bank had printed on it, “NO TRESPASSING.” I stood for a long unsure moment watching the leaves rustle and the signs twitch and twittering swallows pitch and swoon on the June breezes. “KEEP OUT!” “NO TRESPASSING.” They seemed so loud in the hushed conversation of birds and breeze.

There was no clear way round the barriers. A barbed-wire fence now ran along the bank. I could climb over, or hop the wall on the other side and try to push through the tangles of briars there, or walk back down the road I had come up and figure out a new route for the day. I was annoyed, as I had invited friends from the city to visit the next weekend and had intended to follow that same route, the most scenic and interesting I had yet found.

Walking back down the boreen, kicking an odd stone chipping from a long-forgotten repair effort, I passed an old man – I’m sure I had seen him before – going in the other direction.

“Nice day,” I hailed, and when he nodded and smiled, added, “The old path up there has been blocked off, just in case you are headed that way.”

“Yep,” he replid. “That path’s on old Mack Murphy’s land… he’s a cranky devil, doesn’t like anybody crossing his patch, says they throw rubbish, and leave the gates open, and scare his cattle… so he has it all fenced off now… though I always thought there was a right-of-way up there…”

He walked on, and I started again, too. Not far after, another man was standing on the side of the road leaning against a post and hammering in some new fencing where a section had rusted away into the air.

“Grand old day,” he called out as his sheepdog came down to sniff my legs. “Lovely, ” I replied, “though the path up there is blocked off so I have to find another place to ramble for today.”

“Ah, sure that can’t be helped,” he said as he straightened up. “Old Mack Murphy lives up there, and there’s a brood of rare corncrakes nesting on his land… didn’t he fence it off to protect the little fellas…” He chuckled and shook his head in bewilderment. “An odd fish, isn’t he? But some bird protection crowd came out a few weeks back…old Mack’s a softie… such a fuss over a few little birds that nobody even sees”

I hailed a goodbye as I scratched the dog behind his black ears, and was off again, a little lighter of foot.

In the pub on the edge of the village I pulled up one of the outside chairs, ordered a pint of plain, and sat back to watch the world go by, or at least the clouds amble over the hills, my aims for a healthy Sunday wander put on hold. In any case, being outdoors in any capacity felt healthier, delusion be damned.

The waitress came out with the pint and placed it carefully on the small table.

“Nice day for it,” she said, with a smile at my slouched frame and my feet hoisted up against another chair. “Ah”, I laughed back, ” I was planning a good old walk but the path was blocked off, but so it goes…”

“Oh, ” she replied. “You must mean Mack Murphy’s place… I heard his nephew is trying to claim some of the land – it was the old family plot – and he had it closed off. They’ve gotten the solicitors into it now… sad really… it’s a lovely place… used to go up that way as a kid.”

I stared into the pint. Another man who had paused after coming out behind the waitress turned and spoke. “I wouldn’t believe that Marian,” he said. “Wasn’t there a suspected case of TB in Mack’s herd? The department of agriculture crowd were out two weeks ago and shut it all off… nobody is allowed near the farm at all now. It wasn’t even confirmed yet…. such a fuss over it!”

I stared into the half-empty glass, thoroughly confused, and more than a little irritated. How could they all go round with a different story each? I took it into my head just then to go out there, to ask him myself, as all those versions of events would annoy me for days. If I could hear it from the horse’s mouth I could forget the hearsay.

I finished the pint, said my thanks, and started up the same little narrow road again. Nothing much had changed, all was green and rustled, the blades of grass in the fields leaned under the wind as the shadows of clouds sailed over them in darker shades.

As usual, my mind continued to trundle along ahead and imagine the encounter, and the more I thought, the slower I walked.

If Old Mack had blocked the path off because he was sick of trespassers using it to get to the hills, then he wouldn’t be too happy with me showing up. In fact, he’d probably just make up some tale to send me away; far quicker than confronting me, a righteous sample of his aggrievers. Or he might tell me there are rare birds building rare nests, or even a case of cursed TB, just to make me go away in peace.

Then again, if there are indeed rare birds, he won’t want too many people trooping through, and he might tell me that it’s private property and that too many folk have gone in, snooping around, littering. And If he really is in a dispute with his nephew he would surely be too proud to tell me that, and if there really is a case of TB he will hardly tell me either. In fact, no matter what he tells me, if he tells me anything, I will be no better off.

I stopped waking altogether. I wasn’t in a position, right then, to get at the actual truth, whatever it was. No matter what any of them said, there might be another reason with its own opinion and logic, and meanwhile the signs would remain, KEEP OUT and NO TRESPASSING, the only concrete facts of the matter, probably put up late in a night with no witness. It seemed that truth might be a transient juxtaposition of perspectives and propositions, with no unmoving frame of reference to be had, unless it could be founded on some unshakeable version of events… even if I had been there , had helped write the signs, and even had erected them myself with one purpose, what’s to stop there being another version outside my awareness?

In any case, I had gone far enough. I turned on my heel once again, on my narrow peninsula of jaded public road between an ocean of fenced-off earth. I would have to live with the signs and wait and see what they signified.

On my way back down again, I met a group of three, decked out in hiking gear, coming against me. I hailed them a greeting about the great weather and told them that the way ahead was freshly blocked. Of course, they inquired if I knew why.

A devil of an urge came over me. “I think some dogs chased the owner’s sheep, killed a few too, and he fenced it all off, ” I told them, and kept walking, maddened at myself but enjoying it all the same, my impulsive fabrication. They kept walking on anyway; they’d see for themselves soon and make up their own minds.

Written June 2015, Dublin/Galway, my first stab at a short in a while.