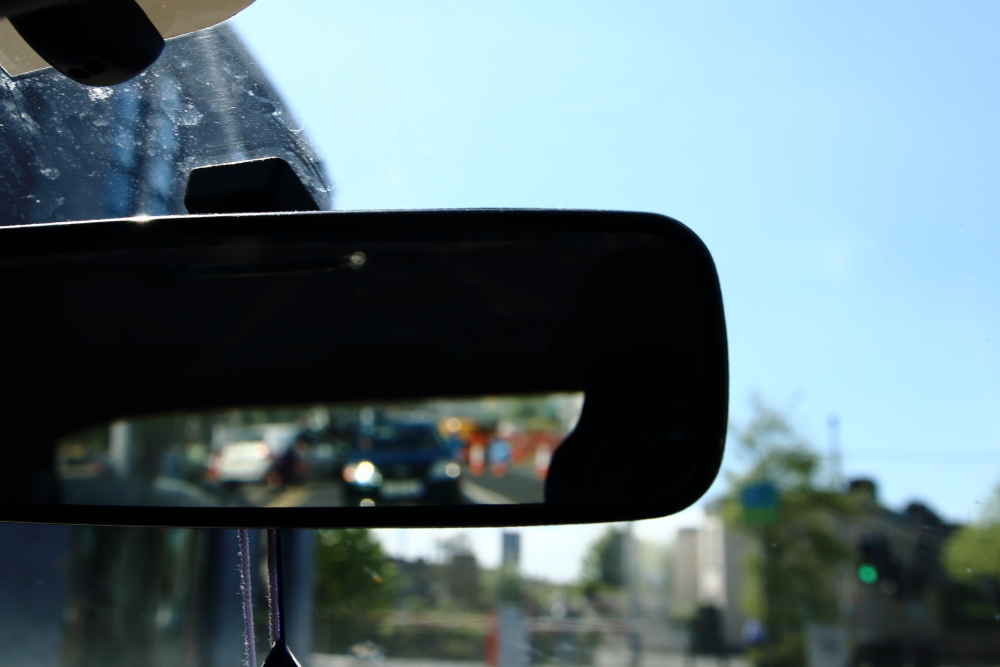 The Mistake (a very short story)

Wasn’t like the daydreams at all. They chased me up Taylor’s street and left down St. Kilda’s Avenue and over the grassy wall into Finny Park where the trees were just beginning to leaf and for a change nobody was walking a dog. I had my heavy work shoes on and had to drop my hipbanging Macbook-holding bag and it was too soon since I ate. In my daydream I would happen to have my sleek running shoes on and would toy with my pursuers, leading them on a merry urban dance, always a step ahead and in control through the winding streets. How could it be captured best? A helicopter view perhaps, a wide angle shot from above, tracking while zooming slowly as it overtakes me, panning, with me always in the frame, and rising thumping music to thicken the drama. Me, the narrow lanes, and the two dark demented chasers. But in the real-life here-and-now what-the-hell-is-happening pursuit I couldn’t quite catch my breath, and my gammy knee buckled in with every stride, and my jeans chafed, and when they caught me they hauled me to the ground and after a good breathless kicking dragged me back onto the street and into an arriving old green Nissan Primera that then sped off.

It wasn’t like the nightmares either. There was too much rushing detail and no time for foreboding and too many clear bouts of sudden pain as I took the punches and my head flapped back and forward. It was hot in the car and I was sandwiched between the two chasers. I tried to yell and managed to swear and shout out “what do you want?” but I was winded and my jaw felt like it had just been borrowed from someone else and I had to speak through a newly brokentoothed gap.

It was hard to tell the two apart. Brothers maybe, with red uneven faces and close eyes and short cropped hair. Left had an old scar over an eyebrow and more stubble. Right had a cotton shirt. Old? Hard to tell. They looked vaguely familiar. The twentysomething woman driving looked familiar too. She kept glancing back in the rear-view as she drove us jerkily north out of the city towards the coast.

The twentysomething woman looked back. Approvingly. That was nightmarey for sure. Sudden unexpected malevolence, deep disturbing grip. But no waking, no waking, and stabbing pains in my cheeks and chin and abdomen.

So it wasn’t quite a nightmare then, or one of the idle stories that could often waft across my brain on a whisper of wind. A “first-rate fantasist,” Divilly had called me once. I was dribbling and it was hard to think and panic surged and I shivered but I was held down and we had left the city and nobody had noticed. Nobody noticed at all, through three sets of lights and a roundabout and along the prom in a line of traffic. I tried to send my focus deep down into the nail of the small toe on my right foot. But we did not evolve the ability to ignore panic and pain. It is too useful. I could only slump under the weight and the blows went away.

A least when we pulled up with a sliding jolt at the end of the dark drive down the tiny grassy road near the sea there was some alignment, some control. As I might have imagined it: I pushed hard against right after they pulled me from the car, then swivelled on my heel to get my arm up with force and my fist into left’s stubbled jaw. His mouth clicked nicely and his head pitched back and my hand burst into pain and I was already expressing my knee with vigour into right’s cottonshirted stomach. Then I was running and over a stone wall and into a lumpy field of Atlantic edging bog.

But but but, the wrong shoes, the wrong pants, overfed on office lunches and submerged in sticky pain, my foot caught the soggy lip of a brown bank and the rest of me followed forward in a collapsing arc, down into the boggy ground where the weight of three crushing bodies soon arrived on my back. Water in my mouth, no air, no air.

“Don’t fucking move” said left, who was now on my right. A kick, or a punch. Nobody around for miles.

Right was to my left now, as I pulled myself up enough to gasp air with the bogwater. He had a long lump of wood in his hands. The woman was behind him. Crying. The wooden lump was raised. A seagull patrolled the salty sea breeze above it. I could see the field stretch down and give way to black craggy rock and mutely glinting surf and in the distance the karst cliffs of Clare with the lights of Kinvara beginning to twinkle.

“To Emily” she said.

“For Emily” he said.

I shouldn’t have killed Emily.

This is based on a recent news story about assailants getting minor community service sentences for being involved in an assault where a man was killed, and a strange experience driving to work one day last month where it seemed that a man in the car behind was being punched by two others. It got mixed up of course in some ideas about a possibly unreliable narrator and the violence of justice and the collision of fantasy and reality and the hills of Clare in their stony western march on the far side of Galway bay in early summer.