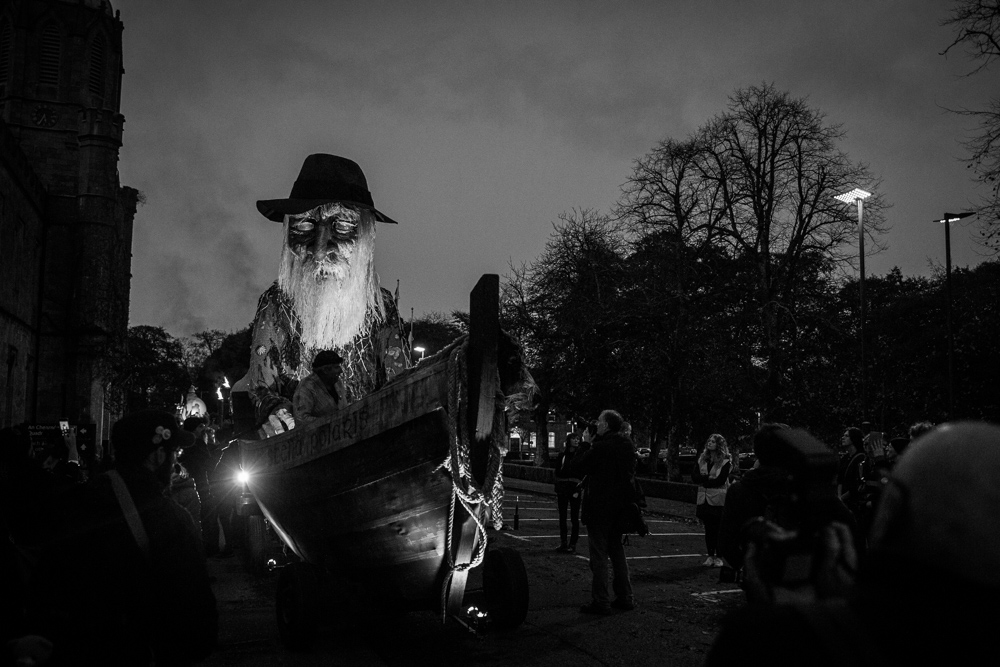 The Dark Half. If you were to cut a year down the middle, right through the belly, it would make sense (in the northern hemisphere at least), to choose the time of Halloween.

This is when Daylight Savings Time is cut from the clocks and autumn cedes to winter. It’s a transition from light to dark, from long summer days to long winter nights. Yadda yadda yadda.

On the edge of things, comfort and definitions are tested. Hallow’s Eve was a point when the souls of the dead were able to mingle with the living. To confuse them, we, the living, put on masks of them, the dead, and danced a hooley. We marked an indistinct edge between light and dark, life and death, growth and decay, here and not here.

This is where Macnas aims to tread, on the edges, crafting primal energy into a fling with moderated chaos.

Leaves still cling on for dear colour in the university trees. The whole parade is lined up outside the quad and doing its final prep. This is probably the first time it has assembled in full, costumed, made-up, skipping with wait, ready to roll.

It can’t go overboard. It can’t become the objects of menace that it hints at. But it can resonate with and fill the spirit, and throw a bone to the pagan within.

I’m not sure about being there. I’m an imposter, a parasite, a camera-appended outsider, an invasive specimen.

If you’re in traffic, you are traffic.

If my view is blocked by a photographer’s head, then I’m blocking someone too. I can’t be invisible. To measure, interferes, and to record, is never truly unintrusive. We change when watched. Yet here I have a DSLR and a bag of lenses and here I join more reputable media and here I try to not be there but be there all the same. I’m not sure what I’m trying to get exactly. Just going from one shot to the next, clickity click, aperture down, ISO up, and wishing I could absorb and become the energy.

I sometimes think that in these situations empathy becomes a communal wave, and the social animals within align. Do we need to commune with a spiritual herd, every once in while?

But crowds are tough, and 40,000 is a lot of bodies to cram along narrow Galway streets. So many faces, so many reactions, and all so unique and aware and real. Imagine how the parts of your brain that work on face recognition are right now, zooming from figure to figure in the dark. It can’t keep up; it dissolves and quits. Someone yells at me and it takes me three or four goes to see Morgan there with his family.

Contorted-but-elegant masks. Bangs and belts, thumps, and rumbles. Music and singing and voices over the din. Clapping and roaring.

The crowd must become ones, must interact, react. The audience is part of the show. Et unum pluribus.

Some fill in the blanks with imagination and find fear- yelp and roar.

Others push out from inside a comfort zone, grimace and grin back, assured that they are solid and correct.

Some have lost it altogether or never arrived.

Excited parents ride on the innocent connections of their children.

And then there is the mediation. The extensions. These are our holy digital devices, which we layer between our senses and the world, like necessary appendages. Maybe they form another enormous inter-connected social brain where we extend our empathy. Or not. We haven’t figured it out yet. Too new. Our digital appendages greet us when we wake and lull us to our sleep. We manage our own parade on the edge of being there and not being there. Life, mediated.

What is the most THERE you can be? I mean, in the world. I’m trying my best. Engaging the senses. Using my camera to stare, and hopping along between a group shaking sheets of wobbling loud metal, and a beautiful singing lady with a silver ship for a hat and her own trailing lighthouse. A woman with a smoke-making device keeps pace, and every few dozen metres fires it off. Such a smell! My left eye is still seeing green squares from when I stupidly fired the flash into it at point blank range earlier. I guess now I’ll find out if it really does damage the retina. And all the time I feel I shouldn’t be there, and should be grabbed and flung out. Am I in the moment? Clickity click. Shutter speed too slow, ISO too high, Av, manual, back to Av, autofocus just not on point at f1.8. Where am I?

I shouldn’t be there, in the body of the parade, but once I make the transition from the preparations to the streets, which seems to happen with no border (was I expecting a starting pistol?), it seems like there’s no way out. There isn’t a single chink in the buzzing wall of people from NUIG all the way through town to the Claddagh. Left across the Salmon Weir bridge, right onto Eglinton, right onto Shop Street, down the cobbles to Mainguard, across Cross into Quay, on over the Wolfe Tone bridge, and left off Fr. Griffen to the Claddagh.

The entire city seems to be wearing a costume and has transformed, and stepped into a gap (mind the gap, mind the gap) between by-the-book routine and what-the-hell chaos. It’s a touch Mad Max, with more dancing and less Rocky Horror, with uproarious noise and balls of fire and smoke and masked dancers. There is a beauty, and a grace, bulbous contortions, sudden leaps, intense pauses and frantic swivels.

And then, it ends, like it began, with no distinct finish line or checkered flag, only a gradual breaking up. I’m frazzled as hell and have filled a 32Gb memory card and am a bit drunk on being-there. Still feeling guilty, too. Still wishing I had a lanyard and a title and a tag to give me a bulwark against the idea of me-as-parasite, showing up, tagging along, soaking it in, adding nothing. I assume my pictures will be mediocre.

And I’m thinking about the way we put devices between ourselves and the world or if the devices are just more of the world. I’m wondering if we can fully immerse or if we could ever fully immerse or if the noise is just noise and we need to remember that we can tune out and see that the country is richer than it ever ever was. That the sense of foreboding is itself an indulgence. I’m somewhere on an edge under a squadron of diving thoughts. Feckers. One of them is that all witnessed things need to be given space, and put on a pendulum not a pedestal, not held up as pure, atomic, definitive episodes, only nudges to a scales. Hyperbole. Hyperbore.

The water in the Claddagh quay is calm and still. The roads are back open to cars again. The city has dropped the costume into the River Corrib or the Atlantic (where does one end and the other begin?). Buskers return to the streets. It’s still not raining, but grows cool then cold. 40,00 people need to be fed. It is a full-house Bank Holiday Sunday night.

We have gone to an edge, signposted, planned, and policed, and now return back to the safe routines. But we will go edgewards again, one way or another.

and magnificently we would fold, into the mystic