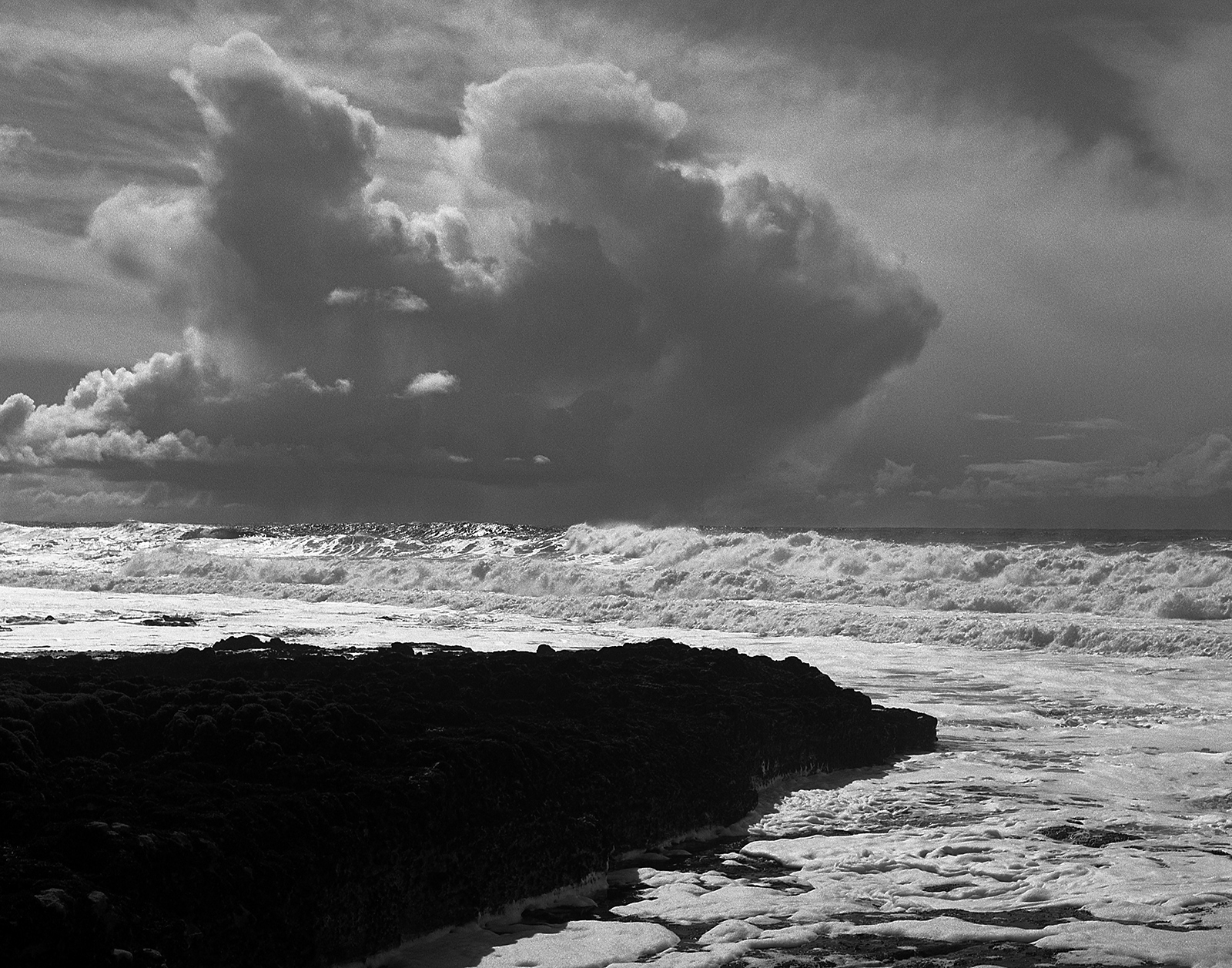 Thump thump thump of stiff hull on salty mound. Gannet gull tern rising and falling in and out of sight. View pulled apart to its original full width, in the broad hiss and hum of ocean passage.

Three constables crouch in the lee of the short concrete wall at the stubby pier, their leaking boat bouncing in the miserly harbour shelter. Away from worn old pots and barrels, pipes of a half dozen stills are piled in a tangle by their mud-caked leather boots. The dusk has been swallowed early by thick torn cloud. An unexpected storm is dragging over the small island, raising broad hills of wave on the exposed stretch back out to the mainland.

Having appropriated the poitín operations in a rush, and quit the rising frustration of the islanders, constables three have returned to find their boat scraping loose against the pier in the opening notes of rising gale, with a fresh hole torn near the waterline. Retreat blocked, angry locals behind, in the half shelter of a loose wall, they consider the long night ahead.

“Why did we start so bloody late?”

“Why send three? What use is three? They sent a dozen and more to Inishkea, and that was in June.”

Flick flick lights in corners of eyes. Snapping in and out, eager winking notions. Partly there and mostly not. Why does this life of constabling flicker along its edges?

“We should have left.”

“Go if you want. I’m not getting in that boat.”

“Send the three buckos out, and himself grigging behind the desk.”

“There it is again.”

Squat glass bottles of the bitter contraband, fragments of grass floating inside, stacked in a short line. To pass the tumult, three constables taste the fiery liquid. A little to warm cold limbs, a little to burn hungry throat, a little to steady tight nerves. Sip and swig in the leaky lee. Constables three lament their troubles.

“What if we fall asleep?”

“We shouldn’t drink it.”

“It’s bloody freezing. Pass it over.”

“It’s alright for ducks, we’re not made for this.”

She was a fine morning alright and held the gaze and what more could a slosher hope to hold? Respectable receptacles and the same dinner for every tomorrow and pension enough to repair old window panes. Don't mind them they're only jealous of a clean-ironed uniform. An instrument of the wholey God himself and holding hard onto that gaze still it's only a job and who would want to leave a solid patch and rogue away?

“We’ll be good for nothing soon, sleepy and pissed.”

“That’s when they’ll sneak down, throw us into the harbour, sink that bloody boat.”

“Send the three gombeens to the islands. A great joke.”

Another swig, another rumbling gust over three constables crouching further down.

“I saw lights, up there. Look again.”

“Why are we waiting?”

“Lights out in this gale? Have to be out for us. What else would they be at?”

“We broke up their stills. Probably their only easy money.”

“How do they make a penny out here?”

“Less shite than we have to put up with I’d say.”

Mallards landing in new canal and the rustle of new park grass under a shining new pram and always something new in the pockets and in the mind and no holes in the new socks and why would they be shouting and roaring over old shite they can't understand and why hiding rifles in damp sheds and always cursing the world and dumb with threats and isn't it good enough as it is?

“A week maybe, never a winter.”

“Now’s our chance. They’re just watching us get drunk.”

“This really is strong tack.”

“We can cut them off up there, or scatter them. We have these ties. We can lash them down. For Christ’s sake we’ve pistols. What do they have? Only old blunt tools.”

“Shovels? Oars? Or rocks. Pitchforks. Haven’t they fists and boots?”

“We can tie them down easy. Sleep out this gale, get out quick in the morning. It’s a short run in.”

“Send out the townies. I’m sure they’re having a good laugh now round the fire.”

Night steadily clamps down on the island. Constables three match each flung gale with fresh sup, squirming and cursing their discomfort and fear.

“I’m not staying on this blasted pier all night.”

“Sons of bitches laughing at us.”

One unfolds unsteadily, finally emboldened enough, and the others haltingly follow. For a moment they stand and rock, clumsily checking pistols and waiting for bubbles of dizziness to burst. Then they set off up the knuckle of hill where they swore they saw torches. Up mushy slope, with squalls haring down against them. Boots sliding in short sheep-chewed grass, clumps of rough heather, spurts of rushes, knobs of weathered stone. Boots sticking in holes of wet black soil, falling into hidden hollow drops, taking jerking arrhythmic steps.

Marooned keepers of parochial peace at the mercy of concealed savages, offical steel pistols loaded and cocked and cleaned in prescribed belts.

And now up and over mushsoft hill brow, wind squinting into sharp whip, barrage of rain slung over dull blunt dark. The entire Atlantic tilting from sky to ocean bowl, emptying ancient fatigues on harassed outskirts of rock. Tide after tide of rolling wild, breath chasing breath with barely a gap between.

Three bone drenched constables can no longer speak or swig or see, and wobble under each wave of rushing air. By no choosing now they follow in hunkered lean a furrow towards faint broken cottage walls where field stones converge. Wordless they stumble over spillings of knocked wall and in under the flapping last scrap of roof.

Suddenly they are inside with the islanders.

Teak tough currach-worn men of scythe and oar and long dark damp-turf winters and unshielded ocean sun, blunted on rock-ridden land and giddy pitchfleck sea. Six of them in a low huddle round a lean fire, drunk.

A sudden disorderly straightening of men in dark, one groggy as the next, in the careless lashings of wind singing round the gable to lift and drop the rusted morsel of roof.

Goose loose in a bog's bag of flesh. Badger sow stuck in a scraw of tunnel and skinny terriers yelping down down down. Accumulation of wave on wave, one nameless as the next. Creases in bare skin that will soon be leather cliff face waiting to crumble. Wave on wave and the wearing of rock into small round beach stones. Holding on to the gaze of the world.

Gawk into shadows on the handle end of a prescription pistol. More polished than pointed. Not what they teach you in constable school. Girth of a long night's craw, carbuncled tunnels of trapped badgersows stonesundering on an uncle's farm into hollow tiers that narrow to thin points. Every man's mainland has breaking shores.

Filled to the gills with the nectar of appropriated island stills, rocking on snapping air snatching at poor shelter. Every man has his myth to maintain, for his sons of sons to be or not to be, or the torture of a bad word from one neighbouring ear to another.

There are myths to maintain and defences to be manned, for fear of being caught on the wrong end of logical inductions. But here, they may reason, before or behind raised handle ends, of gains and losses and future returns, and of the distance of defendable truth from boozeshot memory.

Gusts in the gulley. Constables three consider the drying of feet and the knowing grins worn by sergeant suits.

“I don’t remember exactly, sir. It was a long night. A terrible storm indeed. At least nobody came to harm.”

“We waited out the night sir, by the pier. No shelter at all, not even a tree. Damn lucky to get out of it in one piece.”

“We held our ground, sir, and were well surrounded. But held firm sir.”

“You can have this damn uniform back, I’m done done done.”

“No need for any trouble, is there lads? Don’t we all have homes to go to?”

Lowering shaking pistol, a constable of three reaches his free hand slowly for the outstretched bottle.

“It’s a fierce storm for sure. I don’t know how ye manage them out here.”

“`We manage, same as everyone.”

“`But the winters must be cruel.”

A long pause swallowed in gust. Slowly shoulders relax, soften, and two huddles shrink into one over lean flame.

In the brokendown island cottage tough men drink themselves dumb on dense spirits in the dark of a wild storm. The night folds into itself, and folds again. Stained terriers chasing tumbling down views. What can you grow where the hardiest of trees can’t hold a root?

Far from the paved ends of regional town streets, wave and wind drum away as deepdrunk sleep soaks up the remains of the night.

The storm has blown its guts out. The small hill over the harbour is soggy and benign. A skylark pauselessly sings somewhere above. Loose lumps of cloud trawl higher up in implausible blue.

The copper pots and blackened barrels and scraps of pipe have all disappeared from the pier. The hole in the boat had been hastily plugged. The stretch out to the mainland is calm and flat as new road and glimmergreen in the sprinkled glint of early sun. You could make out the white gables of houses speckling the strip between the sea and the hills.

On a clear day, they say, you can see out what’s cooking inside through the open windows.