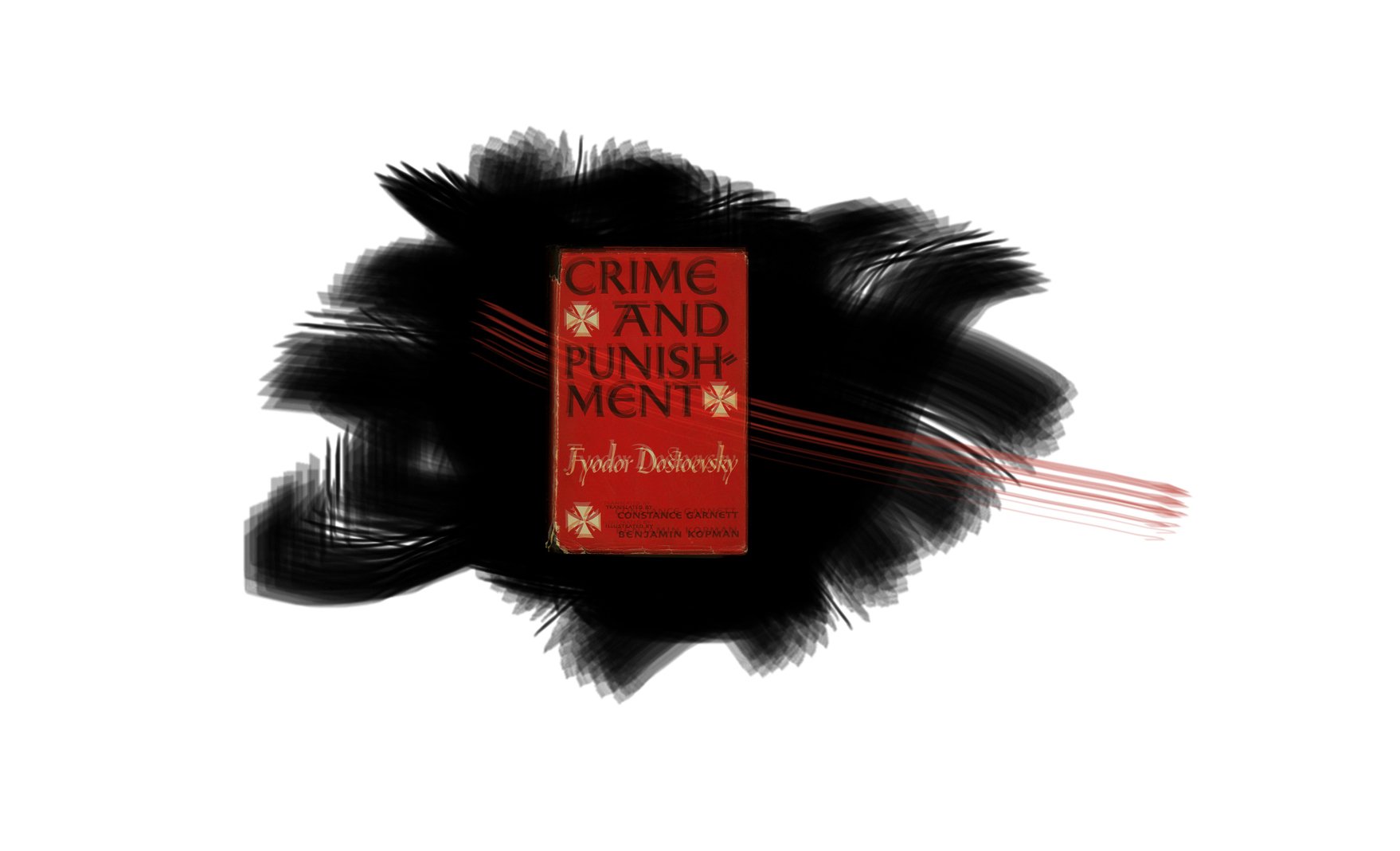 It’s one of those books that you might happen to namedrop the odd time.

“It’s a bit Dostoyevskian, isn’t it?”
Doss Toyevskian?
“A bit Crime and Punishment perhaps?”
Phshsh! It’s a video of a beagle opening a fridge. What are you on about?
[low, meaningful tone] “Well, it is what it is.”
SUBTEXT: “You know, having read it, have I not acquired a deeper sense of the mysteries of humanity, and been enriched for it.”
SUBSUBTEXT: “Respect me, love me, buy me.”

I did read it then, as in, moved my eyes from sentence 1 to sentence FINAL, back in first Arts in NUIG, when I lived in a cold house in Tirellan Heights and was as lonely as a poem about a scuttling crab and I scuttled around feeling everything as much as possible. Of course I couldn’t have given you a set of the novel’s themes if you’d paid me 30 roubles. Five minutes on Wikipedia just now explains more than weeks of confused reading did then.

See, Wikerpedia knows it all. But there’s a Wikipedia reduction, isn’t there? From an experienced journey through a writer’s will-to-write to a curated list monitored by open source sorts. How could they ever be the same? You might as well compare life lived to a description of life lived.

I remember, crime, and punishment: heavy moods, coughing, a densening of my lonerism, an articulation of inner thought to soundtrack the rattling of a rattly mind, an ardent dude who felt and felt and was important in the world around him, the swinging of an axe and no going back, long Russian names, hard Russian weather, not knowing that consumption was T.B., album-length aimless walks through Galway city wearing headphones, the beeps that an ATM makes when there are insufficient funds, beans on toast, not knowing how restaurants expected you to order, and feeling generally very exposed to the elements.

Heft then. The heft and anguished intellectualism of a masterly Russian novel.

And here’s a play to try to bring it to life, with 9 darkly-clad actors (the bio says 11, I counted 9, believe who you wants) and many more than 11 characters. It conjures up a range of scenes on the sparse set in the small Druid Lane Mick Lally theatre (simple dark benches, a hat stand, lamps). There are tense confrontations and intense musical interludes. We start at the end, looking back. The lone pianist’s suppressed playing builds a simple melody through the scenes, and provides doses of minor chords. Maybe there’s a major chord or a rising progression at the end, when a letter arrives from a Siberian prison, speaking of acceptance, perhaps redemption?

The Gist, copied from the play event bio:

“St. Petersburg, Russia, 1865. A young man commits a violent murder in cold blood. He considers himself a Napoleon, acting for a higher purpose. Gradually confronted with the seriousness of his crime, only Sonja, a downtrodden prostitute, can offer a chance at redemption.”

“Morgan Creative are thrilled to announce the premiere of a brand-new adaptation of Dostoyevsky’s timeless story, written by Irish playwright Philip McDonagh. The play features an ensemble of 11 performers, a live score. It is directed by Luke Morgan.”

There’s the gist then, but I’m not so sure there was a gradual confrontation with the crime, more an immediate breakdown as of the crime, then a prolonged period of punishment, principally of the self-negating kind. The gradual change is the rejection of the thoughts that drove the act, and the awakening of a possibility of rebirth. But does violence not have an irrepressible finality? Can it be overcome?

I guess so much violence has been committed, is being committed, that there are ways to live with it, and there are probably methods of disassociation that skip some of the guilt and anguish. Would many radicals turn back and renege after taking the plunge from fantasy into bloody acts? Even if they do, would society really forgive them and embrace them later? I wonder about the marginal returns on the guilt of crimes: once a crime is done once, what difference does it make if more follows? And there is the economics: will a single crime bringing in a decent amount of cash really allow for a life on the straight and narrow. I guess there is a lot of context. It might work out for an attempt at insurance fraud for 100K in an otherwise stable household in a nice area, but for an attempt at 100k from a Post Office robbery by a group of twentysomething men from more brokendown parts of a city?

Naturally, some avenues from the novel are left in the wings of allusion only, such as the family plots and three suitors of Raskolnikov’s sister Dunya. There’s a lightening infusion of regular quipped humour, perhaps a stamp of theatre needed to keep an audience engaged as they navigate the depths.

There are hard-hitting heavy-duty scenes, like the dream of a horse being whipped to death, under an ugly sense of entitlement and ownership. The main assailant, whips, wretched, we assume sunk to brutality through poverty.
IT’S MY PROPERTY. MY P R O P E R T Y

How connected morality and the actions on the menu of life, are to money and means, to having the cash and environment to choose alternatives. How can an individual get out of the cycle of poverty at all?

Here’s the death of a street-wandering alcoholic father whose wife beats him and whose daughter has been forced into getting a “yellow card“: a passport to prostitution.

Here’s the rough and confident mind games of the detective Porfiry Petrovich, and the samovar tea of Nastasya the friendly servant. It all turns on a dark act, a crime that was pre-rationalized and pre-justified but in its doing became something very different. Does all crime have collateral? Stealing 5c from the bank accounts of all people with a net worth of more than 500K? Could you call it a tax? But tax is not an axe? Does the play build up enough empathy to get behind moody Raskolnikov before the murders? Do we step back a bit then and relegate him to an OFFWITHHISHEAD distance?

As usual for me the walls of connection and immersion are tested. A phone beeps in the row in front. Beep beep! A lady takes it out and spends minutes with the screen light on. I can see the screen and know which way she needs to swipe to mute it, but it seems like she doesn’t. Beep Beep! And at the moment when Raskolnikov finally admits his guilt to Soyna, there’s a sudden titter. Blast my overly sensitive radar. Why do I always hear the people whispering in the cinema? I demand engrossment!

I forgot, from my remembered reading, the conspicuous religious nature of the redemptive aspects, and I find it a bit hard to process now. The possibility of being a Lazerus, of returning from wretchedness to a state of worth and, moral rectitude? To righteousness? Asceticism? Good ol traditional values? Does cheek-turning enable cheek-striking?

I wonder what a corrosive acidic brand of contemporary pop-nihilism like Rick and Morty would make of it? It seems to tackle similar heft with more irony and less anguish.

In a secular state, with an embrace of noise and anger and disillusion and echo-chambers and nationalism, where’s the direction of redemption? The wildlife is dying and the planet itself seems to be growing ill, so how do we not see humanity as a scourge, and not be dismissive of the whole possibility of feeling ok about being us-on-this-world? Soyna and Raskolnikov seem to find a possible happiness in bearing the cross, and abandoning rationalism. DO they abandon ambition too, and maybe society itself? What does the arc tell us about living here, now, in the time of Trump and the steady storm-pocked rumbles of climate change?

I guess like all hefty tomes and hefty themes, there’s no end to it, no point where you reach the bit of an equation after the equals sign and can then absorb and immediately forget it. The weightiness of life lived can be hard to manage, hard to offset. Maybe it’s heft all the way down. I feel I must interject my passing with jolts of ironic humour, to take the edge off, but there it is, the rag and bone shop, the ladders and daggers of morality and its veils.

Wikipedia is dead, go read the book, see the play, long live Wikipedia. I should re-read le novel now and go on a few more cloud-strewn-Galway album-length walks. Maybe stream some My Bloody Valentine or Sigur Ros and try not to be popped out by the Spotify ads, that must beset all those who cannot afford Premium.