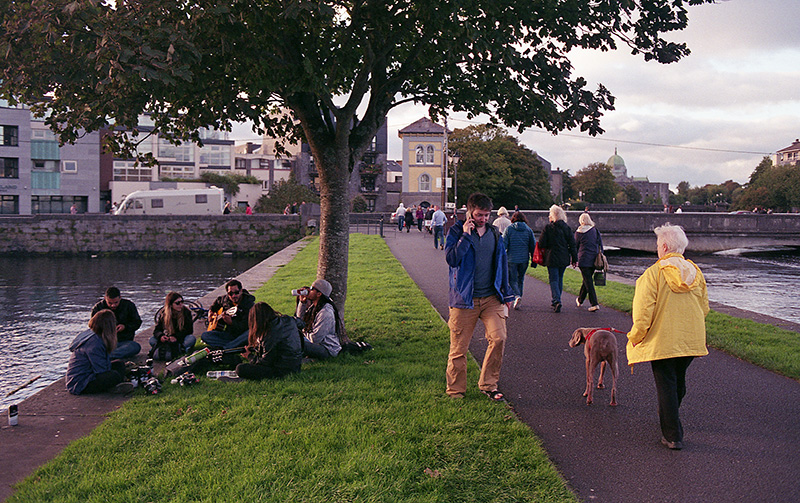 I’ve just left Temple Cafe in the Corn Store, and their grilled chicken sandwich on sourdough bread. Two old ladies, walking slowly in conversation along St Augustine Street. A man on the opposite side of the street, going the other way. The building next to the library is in the process of being torn down. Is that where the dole office was? You can see through a hole in the wall where inside the ceiling has crumbled down in angles of downed beams. It looks like something exploded in there.

Old lady 1: “For them, the Syrians. They’re for them. For them. They won’t do anything for our own.”

I turn left up Buttermilk Walk. I can hear her swearing. The F word. Was that the C word? She repeats it again, “They’re for them!”

A man is daysleep or thickdrunk or drugstrungout in a doorway across from The Augustinian church. St Augustine of Hippo, patron saint of brewers. It’s a long way from Hippo. Where is Hippo anyway? Oh, Algeria, and now called Annaba. The old ladies do not seem to notice him.

“I dreamed I saw St. Augustine
Alive as you or me
Tearing through these quarters
In the utmost misery
With a blanket underneath his arm
And a coat of solid gold
Searching for the very souls
Whom already have been sold”

Why do we so easily generalise a mass of people into a simple attribute or feeling? Who are ‘them‘? Why would you think apartments are being built for ‘them‘? I can sense maybe a rising of simple spite in her, inelegant but vigorous, easily tempted into growth, easy on the tonguetip, satisfactory to the radar of agency and the foil of blame.

Case 1: The driver+car are stuck waiting for pedestrian lights to change. A cyclist rides by up the inside and direcly through the lights, not a care in the world, looking neither left nor right. The driver+car thinks… “Sonofabitch! Cyclists are idiots. Who do they think they are? Do the laws not apply to them at all?”

Case 2: Same driver+car, at the next junction. Another driver+car swings out from a side road in front, blocking his way. “Sonofabitch! That’s my lane- you cut me off jerk! Idiot! Why do you think you can just drive right out like that?”

In case 1 the driver+car is generalizing from an incident to all cyclists, as a group, mass noun, balamable object of agency, atomic and unjust. Cyclists (in this fabricated example) are them. In case 2, the driver sees the other driver as a specific idiot, a human-who-happens-to-be-a-driver doing idiot unfair driving stuff.

NOT SAFE TO DRIVE
The Astra is back in the garage, struggling to get through the annual NCT challenge again. Sixteen years old now. Last year it failed on headlight alignment, twice. Money money money. The engine keeps going though, in its oilburning way, with the warning light flashing and the wipers stopping midway after each stroke. Right now it only needs some brake hose on one side but when the mechanic calls things have deteriorated. “I can’t let you take it out. Wouldn’t be safe.” The brake pads are a sliver’s liver wide and he can’t figure how they didn’t spot it in the Text centre. A money racket, he reckons. You might pass and break down on the way home.

And What We Read Without The Brave New Trumpeting World?