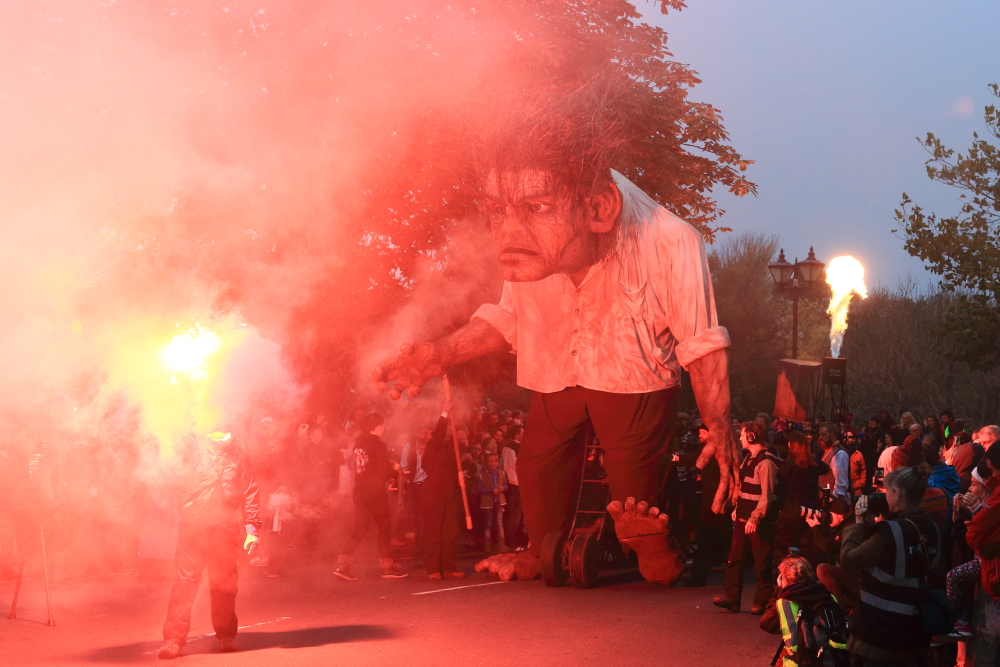 Symphony for the Restless: Let the Night in, let the night out

It moves slowly, eerily, growing from a small blob to the right of the cathedral, into a more distinct giant head as it crosses the Salmon Weir bridge. With hollering and boom, behind the brassy siren of a high-perched saxophone, under a darkening gull and crow wheeled sky, comes a troll with a head as big as a house, and it’s slowly scrolling eyes peering at those who have gathered to watch. 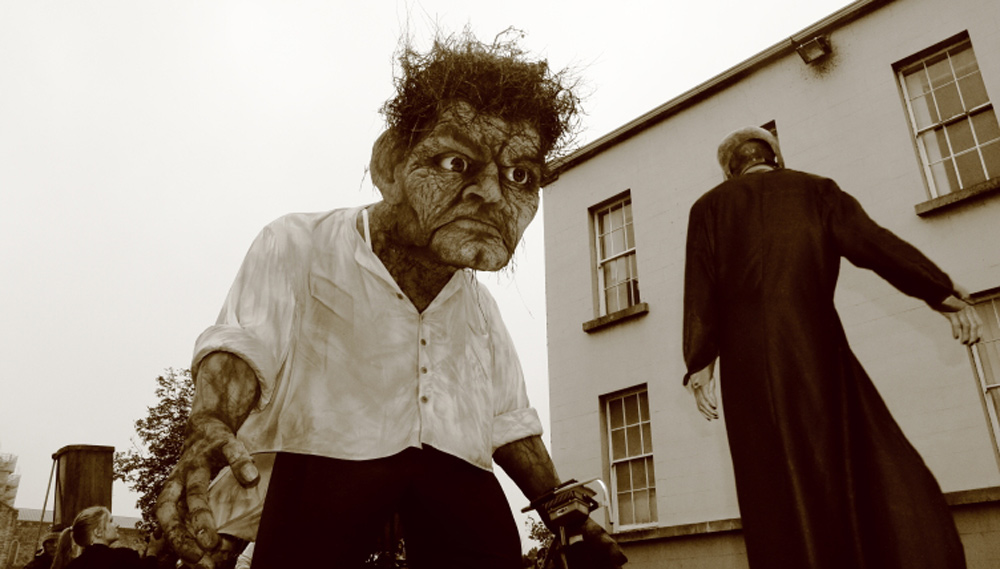 Macnas have the streets now. The troll is on the ascent, ambling up Eglinton Street, turning right down Shop Street, then onto High street.

Onwards, onwards, yell he, we must be born before the sun has risen 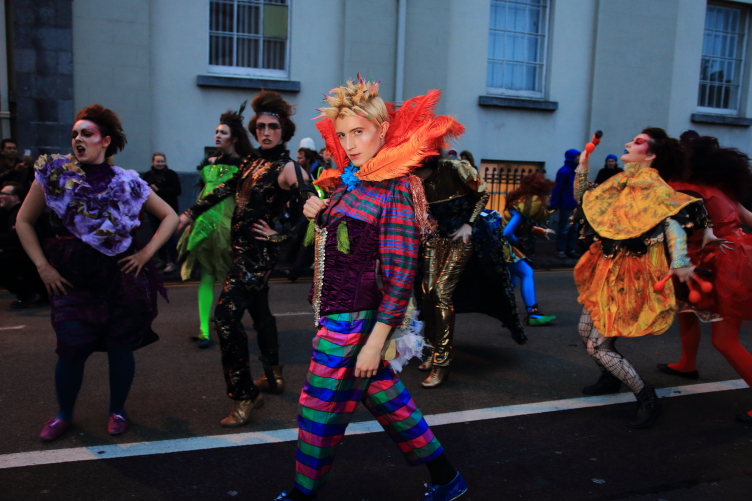 Kids are waiting everywhere, waiting, impatient, then mesmerized as the manic energy sweeps by: fuel for a thousand nightmares; seeds for a thousand imaginations. It’s an edgy racket, leaping and lurching along in the darkening, a chaotic meandering of distorted faces, fumes and snap-spit-cracking bangers, fire and light, light and dark, dark and dance. Skulls, horns, hair woven from a thicket of worn branches.

The little city under a dark siege, a muscular madcap spree of invention, the Macnas spirit and inventory emptied onto the old roads. The troll abides, jaws opening and shutting wordlessly. 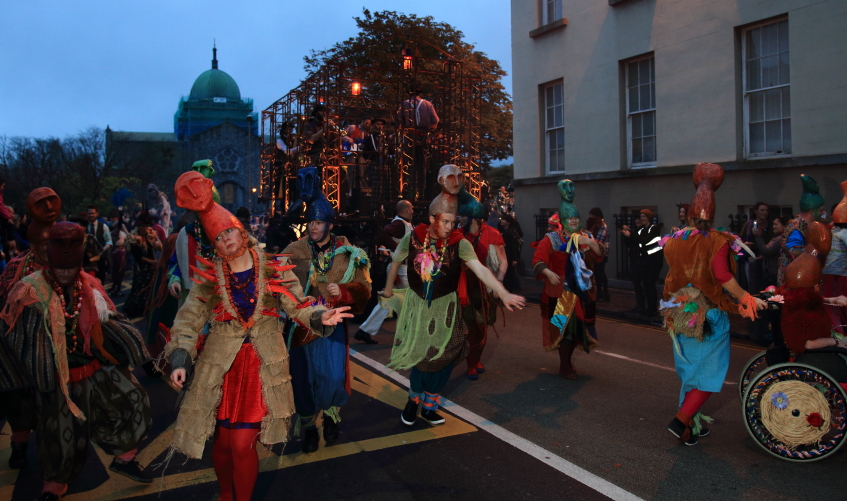 Open ye to the night, to the underside of the circle’s flight, to the bare bones buried there. 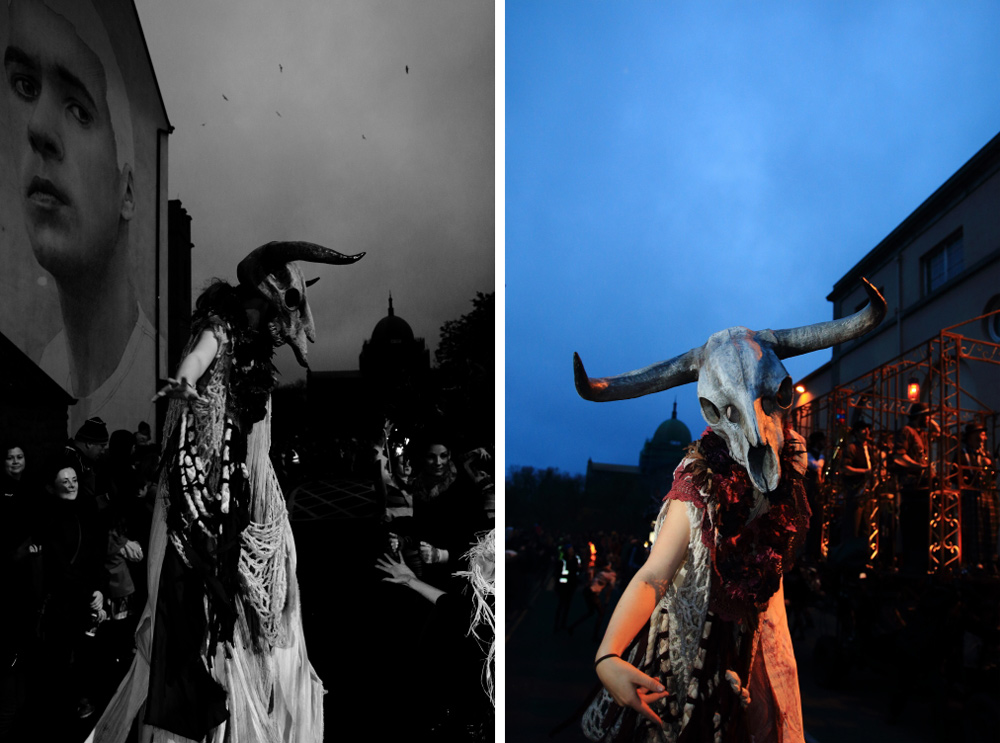 The darkening season in the week of Halloween, on the Western rain-pecked edge of Europe, is a fitting setting.

Hear it, the long night of winter rising! 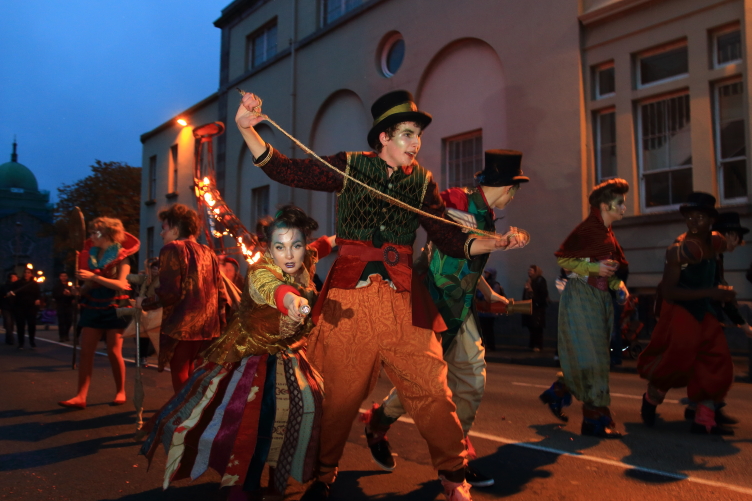 It gets stuck somewhere down narrow Quay street, and darkness has settled in well before the first bellows emerge again from the buildings. There are not that many floats, but this is not a long green St Patrick’s Day parade in Spring. This is a primal gathering with helpings of sinister and hues of dark mystery, more original brothers Grimm than modern eareasy versions with the elemental stripped out. 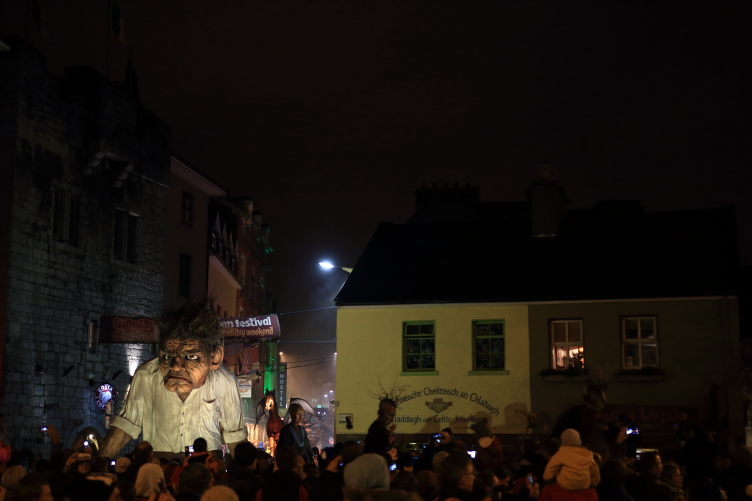 Fear the dark. welcome the fear.

The long night where lies, them lurking traces of buried eyes

The parade heads of across the Wolfe Towne bridge to its end on Fr. Griffin Road. The crowds begin to disperse into the night, a wave dissipating inside into cars and buildings. Normality begins to seep back in. The madness is buried. Until next time.

All photos and words by Donal Kelly. Do not use without permission. I used my Canon 70D with Sigma 18-35 1.8 and 430 exII flash in slave mode being triggered wirelessly by the pop-up. The changing light conditions were interesting; I tried to hold the flash far from the camera to avoid the on-camera flash look and maybe add some shadows. I stuck to Av and manual, and struggled a bit with focusing accuracy at f1.8. I used from ISO 400 to ISO 1600 as the light faded.