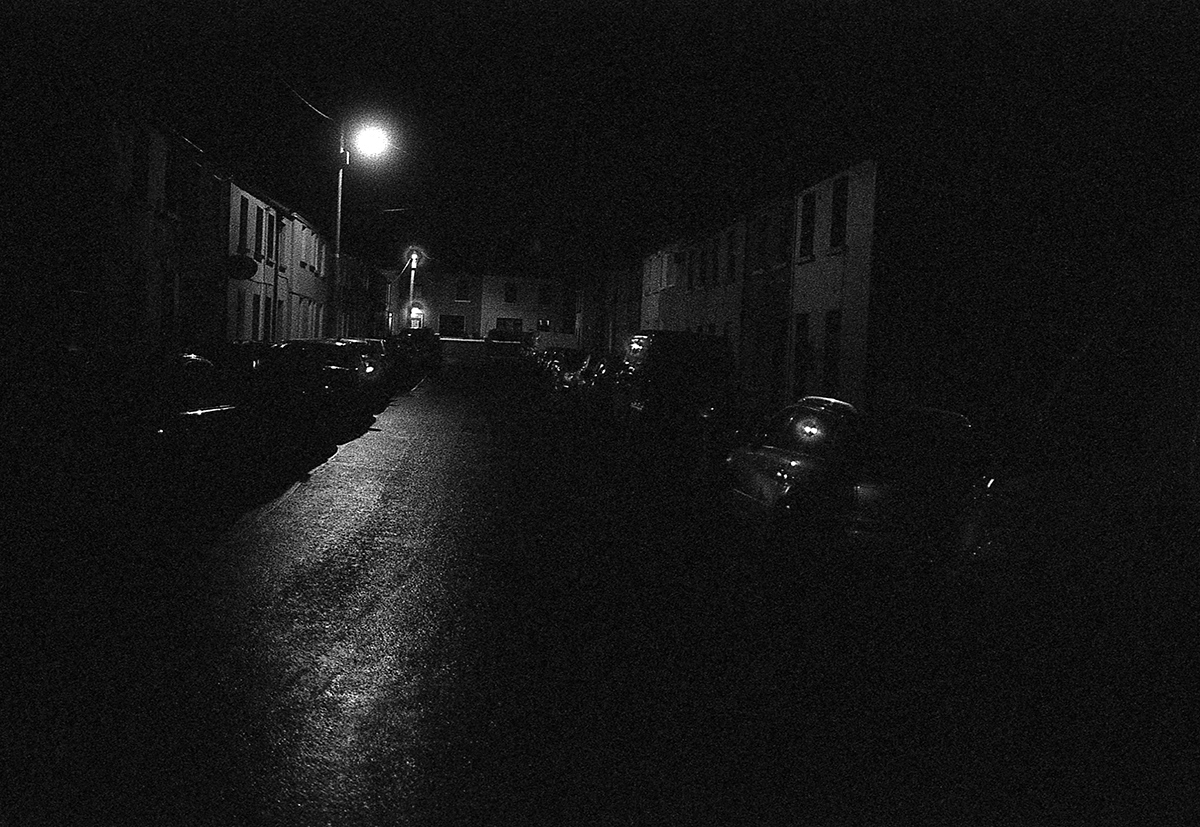 Joe waited until he was home alone before opening the bag. He dropped it on the kitchen table over a touristy place mat and scattering of unopened envelopes. His sweaty fingers gripped the zipper and the canvas spilled apart into a loose yawn. Neatly wrapped bundles of cash clumped in a corner. Joe had never seen six thousand euro in cash before.

It seemed measly, frugal to the needy eye: no retort to the heavy null of a stripped bank account. But it was real. And realer still, when he carefully counted the six bundles one by one, taking off each elastic band, touching one to twenty fifties, leaning in close enough to smell them, studying their varied conditions: some fresh and new from an ATM, others worn with soft foldings from round trips through hand, wallet, pocket, till, safe, and bank.

In his mind Joe ticked off what each bundle could offset. A trip to the mechanic avoided since car test repairs. Visits to two old school friends who got him through Christmas. A call out to his brother’s neat gated bungalow. And the bank. Christ, the bank. He would soak up questioning glances; project calm normality. Just another banal lodgement on a quiet Tuesday afternoon.

“Five thousand. Cash. Yes, might as well get square up that overdraft while I’m here.”

One hundred and twenty scraps of painted paper. His friends would wonder. His brother would ask. Get a new job? Sell the car? Where from? Who from? Joe trod down on memories of the morning just passed. He’d waited for the first time as a customer in the hotel restaurant, until the Richard Murphy he had only ever messaged on Facebook flowed over like an old friend by happenstance, to sit for half a minute before darting off again. As though he hadn’t stopped at all, an in-flight refuelling high up in thin air, precariously perched in the stratosphere, lumbering fat bird sucking kerosene through a straw. He’d ignored the grey canvas bag left casually on the restaurant table until it seemed normal to be finished; normal as a regular on a daily pitstop.

Joe was a goose fat with corn on a field in France.

Fifty then to fill up the car, or maybe fifty five to full, but Joe was loathe to break the notes. One down, one hundred nineteen held. But once inside, minor crisis. The strange fury of options, the power of having the the price of each in his pocket, the inflating of personhood from scavenging crow to keen hovering raptor; they conspired from pump to counter, to accessorize him with a basket of colourful packaging that he barely remembered picking.

One hundred eighteen and a pocket of jingle. Wine for the dinner. Snacks for Maria. Ennobled emerger, he could glide from one end of the town to the other with the dignity of purchasing power. As the balloon inflated out into its mould, knots of narrowing frugality formed as a view, falling down and away. Eye contact and a firm handshake were restored to the world. From one end of Main Street to the bridge. One hundred seventeen. One hundred sixteen. One hundred fourteen. Ticking off burdens that had drained days to briarthorned gaps. The head up, opening of envelopes, and scornless listening of advertising resumed. One hundred twelve. And finally the bank, first refuser, great tut tutter and besuited charger of fees for nonpayments of fees. And having to fill out a lodgement slip with sweating fingers before the security guard pointed him to a machine instead and then a good minute trying to remember the card password.

The machine didn’t mention the fine weather, just arrived, or muse about its chances of lasting. To the weekend? Beyond?

Joe was a flustered mallard landing in a canal in a strange city.

He waited until Michella had left for her new evening class before abandoning couch and tv. He found Maria’s thick puddle suit hanging under the stairs. She blinked and happily made garbled word-shaped sounds as he put her into the sleek car seat. She kept up as they crossed the town and out to one of its appended estates. “Good girl,” he replied every so often to her babbled bubbles of sound.

Mike should be at home by now. And yes the car was outside, and yes he came to the door, and they both marvelled at Maria’s shooting growth and alertness, and how they should have a proper class reunion, and he didn’t stiffen up, much, when Joe put point to purpose and, wishing he was a million miles away under bare sun, asked if he could have the repayed money back again to tie himself over for this month’s rent.

“I think there’s work going down at the meat factory” offered Mike, but only after he had given Joe what cash he had, silently pocketed. “I know you’re doing a bit, but maybe you should ask down there? They’re always busy with the deli trade. And it’s not seasonal like hotel work.”

Joe thanked and thanked meaningfully and needed to leave. Swallow the medicine. Pain, weakness leaving the body. Mike stayed in the door.

“I was surprised you paid me back so quick last time. I mean… I was wondering. Did you get a loan?” Now he looked Joe right in the eye. ” It’s all the same to me Joe, I just want it to work out for you.”

Joe was stuck on the step, stuck stuck stuck, on a needle of knowing in a brute animal getting to tomorrow and tomorrow alone.

“I got a loan, yeah. But it’s… the interest you know? I thought I’d have more hours now. I might go down and ask at the factory alright.”

“Do, do. Steady hours, might do for a while until you get set up.”

He caught Joe’s averted gaze as it passed one more time.

“Listen, I don’t want to be a dick, but, well, I can’t tell you where I heard it, but, well, I did hear you might have borrowed from Murphy. I just wondered if there was anything to it?”

Maria would be getting restless in the car seat. Michella would finish soon. Needle in the hind. Mike had been the soundest of them.

“I was stuck Mike. The bank wouldn’t touch me. You know, the car broke down again and things have been really quiet.”

Joe was a featherless, plucked chicken on a chute to hungry deli cleavers.

“He’s been calling. Leaving messages. Telling me stuff that he knows. About my family. About Michella. Maria even. I stopped answering. I’ve paid off most but there’s a lump left that won’t shrink. Got caught short a few times and he adds new interest.”

“Listen, I better get going, I have to get her home.”

“Sound. Hang on a second though. That Murphy is a real prick. No good. I know a guy. Well, I know of a guy- might be able to help. Just in case- if it comes to it. There are people who can play him at his own game. You don’t need this shite.

Joe drove home with Maria falling asleep and a number for a guy who knows a guy saved on his phone. He would think about it tomorrow.

“Outside the back door of Langans then. Eight. Ya better have it this time. Enough bullshit excuses. If ya want a charity go to the fucking church.”

Joe stared at the phone and wiped his face. There was a steadiness now at least. He could make eight. The rest of it could look after itself.

Michella was changing Maria in the kitchen.

“Are you going out again?”

“Just for a few minutes. Do you need anything from the shop?”

“No; weren’t you down there an hour ago?”

“Yeah but I forgot to get petrol. I have to start early tomorrow.”

7:50. The car had a quarter tank and would last until Friday. Joe parked it off Main street, and walked along looking down at the disjointed pavement. His phone pinged again. New message.

“There now. Will wait. Say nothing to him.”

Head down, and it was dark and quiet, suspended in transition from open to shut. Joe was a vigilant hooded crow on a flickering street light. Langans. The back door down the side lane. Dim as a cellar. He trod on the instinct to survey the shapes of the shadows. What would be, would be. 8:02. He waited.

8:05. The pub back door opened. Murphy. Broad, leaning, shrugging. Purchasing power of embraced lawlessness. Games played in wraps of laneway shadows, banal as the pouring of pints or blinking of bank machines.

“About time. Come on then.”

Joe looked around, one hand going to pocket, eyes pleading.

Murphy closed in, burstling layers of threat, fist or steel somewhere in the dark.

“Shut up to fuck and get it over with. You think I’m a fool?”

The first blow and Joe crumpled, electric needle of knowing and crude fuel of giving in, the world proving the charges he set it. The second blow and a scattering of senses.

“The fuck you playing at? I don’t need this shit.”

And then different shadows, peeling off from lane walls, and such a sudden rush of peeling, of forces multiplied, the embodiment and bloodyment of just reply, and two pairs of strong arms finding Murphy to buckle him, shadow throne to blood dripping down laneway drain, with Joe frozen against the other wall until barked at to scram.

He could hear them delivering their message – his message – to uselessly flapping Murphy, as he wished he was a million miles away under bald sun but was still-winded scrambling back towards the streetlights.

Joe was a startled snipe bursting from bog.

“What took you? Did you get petrol?”

“You don’t look well. Are you feeling sick again?”

“I need a shower, that’s all. Shower and sleep. Long week.”

“Always a long week these days.”

And the shower, to wash the stink off, the grace of clean hot water rushing down, white from the soap, heat and steam around the hind of body beneath and the nozzled balloon within. A new bird, bald quarter ounce of chick in a spring hedge nest, aloft in the elbow crook of a woody limb, feeble and hungry. He could go down to the factory again with an open beak, to see about work for tomorrows.

The murk and shadow and stink drained down into the pipes. The prices of negative balances, the absence of scraps of painted papers, and their own vicious purchasing powers, could drain into the septic tank.

After the shower, and goodnights to sleeping Maria, Joe sat in the quiet, picking at microwaved shepards pie in front of the tv on the untorn couch.

The phone was charging in the kitchen, and when he went to get it, new message. Joe blinked.

“All sorted, that prick won’t bother you again. MB”

And another one. Newer. Same number.

Joe was a murmuration of starlings over a bank of winter river reeds.

Donal Kelly, 2018. The original idea from this came from reading an article about political terrorists (not sure if this word is right- loaded terms these) dealing out street justice to criminals, but also, running their own criminal operations. I had also been thinking about how money pressure constricts life down, and how getting out can be so difficult, and how those who cannot pay are condemned to pay fines and fees for not paying.