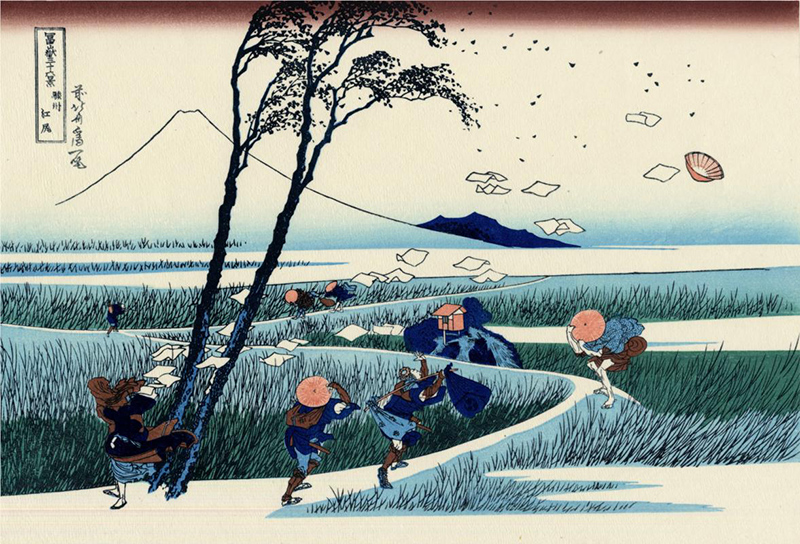 “A fairy gust,” said the mother to herself in the kitchen.

It had come flung from the Atlantic, down through the low mountains and into the narrow valley, lifting the galvanized tin roof clean off the shed and toppling two of the old ash trees in the top field. Three pieces of TV aerial were stabbed stuck in the mossy front lawn and the telegraph poles at the boundary wall corners were both kinked over at the base with the black rubber-covered wires flapping loose.

“Ah for fuck sake,” said the son, lying on his bed after the sudden rush of snap and crash. His Internet signal had disappeared. The window had swung open and a plastic bag, leaves, and twigs had blown into the room. He rolled off the unmade midday duvet and slumped to the kitchen swearing at the damage. No Internet, no phone, the shed roof dumped in the front hedge, and the dog howling away madly at nothing.

“A fairy gust,” said the mother to the son, standing between the fridge and the sink with a mystical nod towards the window. She began to put on a pair of old boots, and went outside without tying the laces.

The son fired on a pair of runners, and followed her out. She was trying to quiet the dog.

“Two of the ash trees are down” she said to him. “And the aerial’s gone off the roof. Look at the tiles!”

The mother pulled a broken tile off an upturned flower pot.

“My geraniums! That was some gust!” she said.

“You’ll have to go down to Paddy Fitz and see if he can come up.”

“For fucks sake,” said the son, as he pushed away the wheelbarrow that had been blown up against the side of the van. Its handle had run a long white scrape along the red finish. The van had cost him a fortune. He started the diesel engine without waiting for the coil to heat up and it grumbled into a fit of smoke-sluggy coughing. Fairy fucking wind. He drove around the tilting poles and off down the neck of the valley. He could see more trees down along the side of the hill. It wasn’t even windy.

The second gust arrived after the son had turned on to the main road, and was driving in third up the rising shoulder of the valley. It caught the red van square and off it went, laterally, almost holding grip then suddenly breaking free sideways and flipping over the low bank and down into the bog, rolling onto its roof and back onto its wheels in the soft ground.

“Another one!” said Paddy Fitz to himself, on the other side of the valley shoulder, looking at where the corner of the shed had been separated from the wooden frame by the second gust and stacked turf had fallen in a pile beneath.

He went in to tell the wife.

“Damned if I ever saw one like that before. And the oak tree down on the wall!”

She hadn’t seen the likes of it either, but out on the islands she had heard a few stories,and she kept still a store of omens and signs, pishrógs and bad cesses and rules, like going out the same door you went in. The aerial was gone from the roof, and one of the bedroom window panes had been shattered by a tree branch. Paddy stared at the mobile.

“They should never have put the damn thing up there anyway.”

“Oh, right, of course. Well, can you go down to the town to see if they have reception there? They can’t leave it like this”

“For fucks sake,” said the son, as he struggled to pull his sinking feet through the bog and back up to the road. His nose was swollen and his neck was vibrating with pain and he felt like he had done a full cycle in a tumble drier. The van was fucked, its roof crumpled in and the chassis buckled. And still no reception. And it was totally calm again, too. All along the road up the hill, poles had been plucked and scattered like rushes by the stalk. He walked with a worsening limp, stepping around debris, until he got as far as the old Garvey house. He went up and knocked at the door.

The mother was out picking up scattered wood and pots when the third gust grabbed her whole and fired her as far as the rhododendron bush. Pulling herself out of the dense stalks and purple flowers, she looked darkly up at the sky, a line of blood snaking down her wrist. The cleaning could wait. She headed for the house, limping. Today was not the day for fixing.

The son was standing on the cement path outside Garvey’s with the cup of tea in his hand when the third gust whooshed down the valley. He had gone out when he saw Paddy Fitz’s van coming down the hill, slowly negotiating the downed wires. The house behind him took the bulk of the weight with a dull thumpy whack, but he still fell forward into the grass. Mrs Garvey screamed from somewhere inside, and when he stood up, he could see Fitz’s van, upside down, wheels spinning. A shower of roof tiles, a chimney pot, branches, fencing, feed bags, and all kinds of branch and leaf, were scattered across the garden, and the beech tree at the back of the house was leaning over with two heavy branches hanging by the bark.

The son limped down to Paddy Fitz’s van, no more than fifty metres from his own, and helped him out from the upside down passenger side door.

“That was some gust!” said Paddy, coughing. “Never seen anything like it! Took me clean off the road!”

“Come on up to the house”, the son said, and between the two of them they made it out of the soggy bog and up to Garvey’s. Mrs Garvey was in the kitchen, looking out at the jumbled mess.

“The electricity is gone now too.” she said. “You’ll have to wait here a while.”

“Maybe it’s a sign?” she said, after a long pause.

“A fairy gust!” said Paddy Fitz. “Sudden burst of wind in off the sea. They get them out on the islands.”

“And not one, but three!” said Mrs Garvey. “Could be a sign. We should stay put. It’s not a day for going out.”

She went to clean the dust from the old stove and put down a fire to boil some water.

The three of them settled in at the kitchen table. Outside, it was calm and quiet. No radio, no TV, no phones, no cars on the road, no birds singing. Not even a rustle from a fallen leaf. A general deep stillness fell around them and they stopped talking.

The son stared into his hot milkless tea. As gradual as the sipped emptying of the mug, he stopped reaching to check his phone reception, and let the pain in his neck and nose and joints flow like his blood throughout until it seemed to merge with the quiet and they all become a background hum. He stopped seeing the crumpled van roof and bits of broken tile and aerial stuck in the mossy lawn. In his foreground, all tendrils of his attention craned out and came together in a narrowing coil, like a sensor for the faintest hint of the next sudden gust. Yet it remained solidly quiet and resolutely still, until a lone thrush began to slowly pitch up again outside the window.

The son didn’t believe in signs or omens, prophecies or fate, or even the future per se beyond the continuous consumption of the present. But in this strangely locked, loaded, cocked heavy calm, a tide of fidget and lie-ins seemed to roll back: a low tide drawing out the sea to expose a fresh strip of naked shore. He swirled the last gulp’s worth of tea in the mug and broke the long silence.

“I’m off for the city come September,” he said.

Paddy Fitz looked up as though awoken. “Oh! Well sure there isn’t much out here lad.”

“No, nope, but I’ll figure something out!”

“You will” said Paddy Fitz. “You will.” He had forgotten about his ankle and put both palms flat on the pine tabletop.

“The brother in London? Larry?” pitched in Mrs Garvey.

“Never been over at all. Long in the tooth now but… I’ll bring over herself and Tommy. We can stay for a month- I can sell that heifer. sure we’ve never been further away than Galway.”

Mrs Garvey leaned in. In the distance, perhaps, or perhaps not, a fourth fairy gust was being conjured up above the ocean to be flung inland, and chunnelled down a narrow valley where a thin reedy river cut through bog that pitched up into the ancient Maamturks. She could feel with calm clarity, the weight of bodied silence around the wooden table that had raised two generations but was creaky now with more meals of memory than food.

“I’m selling the house.” she said.

“Selling the house, and I’m going to get one of those nice little apartments in the town.”

“Isn’t your young one down in the town?”

“Well, sure she’ll be glad for that.”

“She, she might. Some family can take over this old place and to hell with the lot of us fighting over a patch of grass and an old building.”

“That’s if it isn’t all blown down today Mrs Garvey!” said the son.

“And us with it lad!” added Paddy Fitz.

The three of them settled back into their waiting for the next gust, having breached impasses deep below the chuckling of the wind.