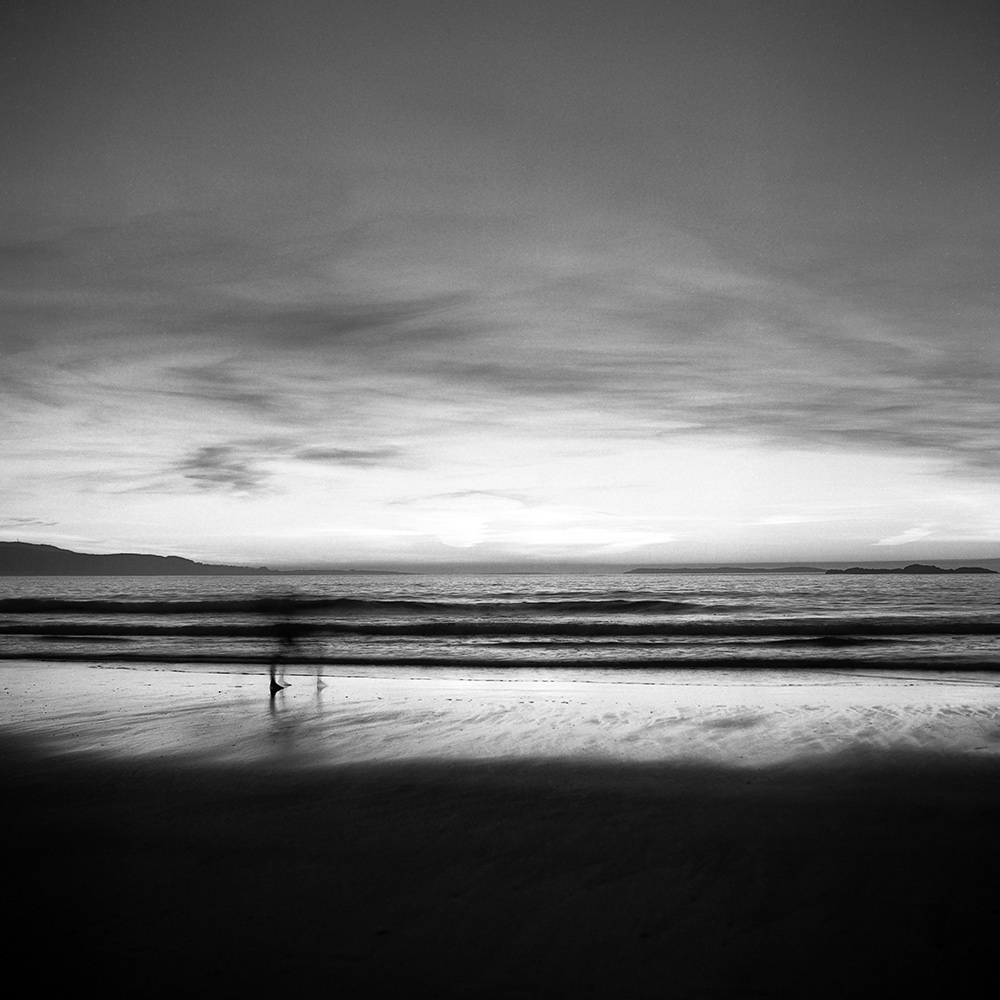 A Day in the Failures of John R. Clancy

John Rufus Clancy tried to become so still that he could feel time pass, but he failed. He could see the clock counting up, but he couldn’t feel its passing. There: that transition between 14:59:59 and 15:00:00, that transition from not late, to late. Where was it? Even if he stared blankly at the mutest emptiest stillest surface, or shut his eyes completely, there was no way to register time itself, just the numbers of its count, the recording of wheels turned or electrons spun. All of his senses were in the soup, a jumble of ingredients unaware of their own dish’s name. His senses and senses of his senses and the idea of a self and its selfness, were all balled up and spun out in time, of time, all the time.

Maybe though, if he pushed himself, those counted numbers themselves, or the idea of counting, or at least some such stuffs, are on the outside, even if the thinking with them is not. Can I, wondered John R. Clancy, 1 minute late now and counting, in my flow of slippery mental states, contain – hold as thought-subject – something that is genuinely outside of time?

The car in front slowed abruptly again. John reacts. Right foot up, over, down, hard on the brake. Friction bites, and his body pushes forward against the rush of road, weight flows into his hands and onto the steering wheel. Find calm, find calm. No, his circulation spikes up, and blood rushes ventricle and vein. Why did he brake? He/she/they/it… there was nothing in the way. Stewy warm anger spurts, encompassing, bladed, intentional, spills like gloss green paint in clear midday sun, or the sound of a cracking plank of dry wood under much load. Kurrsquack of a jagged black raven. The violent words and their rowdy hues assemble with intent at street corners. Will a man ever be calm again? Left foot down, clutch in, gear disengaged, down to fourth, then to third, and all under control again, with enough space, bumper behind bumper. Two minutes late and growing. If you’re stuck in traffic you are traffic.

Would she wait for him this time, clinking her coffee cup and checking the time on her phone? Is she counting up or counting down?

Would she wait or would she tip on, and by leaving cleave the story into a before and an after, a then and a not then?

There would be parking on Munster Avenue.

John Rufus Clancy tried to come to rest like a spun top finding its halt (though it is the more graceful aloft), but he failed. Surely, there is a stable plane for all things to return? Equilibrium. Or was it just another connivy dream’s spin? It comes down to a story, its telling when told, and the politics of the organs as they take to any telling. Surely there was a plot where this was the end: the happily afters or the bitter-eat embers of a shot down hellhound. There are the sudden jolts, and then the stretches in between. It could yet be the beginning? There is the spinning mill of narrative, threads woven and rewoven into fabric and pushed out and piled up, in the good old production of order, consistency, structure, cohesion, resolution. Thunkathunkathunkthunka… down it spills like the scroll of a news feed, falling translucent, topless, bottomless, and more real than what’s outside windows with its sweaty graft and buzzing-by flies and mouthfuls of dust and unexplained itches. Imagine eating food that makes you hungrier and hungrier. You eat more, you need more. John R. felt a kind of desire to have more appetite, or something like this, but more vague, muffled, the echo of a banged pipe down the gullet of the briny brain.

History class. Nineteen-Ninety-something. She didn’t do her homework, or something. Something lost, buried in the scrollfeed, in the making and unmaking of beds. She said that after, whatever, and John had never heard it before and saved it as something really significant. But what wasn’t significant then? Could a life be primed forever by a few snippets plucked from the sky in early days of feels?

The rain is still coming down when John R. reaches the cafe, but is more drizzle now than pelt. Earlier on, the June bloom had been spoiled with light. It turned as it often does, under the whim of blown bellyheavy clouds. It’s wet, or it’s dry. So it rolls, by and by. It’s wet, or it’s dry, or it’s ‘it’s wet, or it’s dry’, and so on. He didn’t put money in the meter- there was less than an hour left in the working man’s metered day.

Maybe she’d left by now, and there was probably a message or three unread. Maybe she’d left just now or five minutes ago or a year ago, according to the piled fabric of narrative, according to its thick knots written and unwritten, a thing to be counted but not felt. Time. Take the world at its most solid, as a lifted black rock from wet soil in the hands or the idea of the number one while lying in a quiet (lonely) bed, and yet but a passing flow over an abrupt stone in a river, or the shimmer of a bent ray deflected by a little ripple of a gurgling stream down a boggy hill finding a pair of eyes and all their percept on some point. Did the history of the world conspire to arrive at just this or that flicker on a ripple?

The ostentatious John R. Clancy was there, but she was there or she was not there. It’s hard to tell, that something isn’t there. You have to search every possible seat and wait to see if anyone comes out from the toilet. Coffee for one so, and messages checked, too late, and suddenly sweating at a little table, with barely tasted cappuccino and cake. Maybe it was a waste of a few euro, or maybe the motions of teeth and throat kept John R. upright, with head down, reading some latest breaking news on a bright screen, hunched over a surge of anger aimed squarely at the idea of himself and all its pretentious wanderling baggage and lazy adorned habits. He wondered if she‘d sat at the same table. He could ask but he wouldn’t ask. Was there a dark-haired girl in just now? How did she appear; I mean, did she look pensive, agitated, or resolved, confident, calm? Did she leave with an unwiped tear or a fine carefree air?

She said that in an art class some time before some forgotten exam. That was when the collapsed self of later school years was still pending reformation, still stuck on its spear-tip of self-consciousness and self-disregard. What self? What over? To jump? And where to land? to climb? And where to ascend? And yet it seemed again, significant, so he saved it down good and deep. To here, years later, some thin- spun maturity, the aggregation of accumulations. Maybe it’s better to barely be a self, but always intertwined and carried by the senses to the great outside, and less aware of the looker looking and just looking, just being.

Ah… beds made, holes dug, selves to get over, and the deeper dimmer dug the more enticing then to just carry on, head down, busy out, duvet over the head and back to sleep, digging.

Much later, John Rufus Clancy tried to set up a comfortable place to sleep, but failed. The only flat patches of open ground that he could find around Ballyvaughan all had signs with

“NO CAMPING. NO OVERNIGHT PARKING. BY ORDER OF CLARE COUNTY COUNCIL”

He had eventually found the lumpy stub of an old broken pier outside the village, and pitched the tent in the middle of it, on a bumpy crop of tall grass and weed. He had cycled down with laden pannier bags, and eaten a pizza where the young waiter spoke English with a Clare accent and French with a French accent. And he had sat out by Monk’s pub on the wall over the sea, with the sounds of a folk band’s ballads carried out through the open door on a calm bright late June night.

“Black is the colour, of my true love’s hair”

High over the bay hung wisps of red and purple woven into the deepening dusk.

He had sat there until his legs grew numb, and he tried to see the fading of the light, tried to see the change itself without looking away, but couldn’t. Lights began to twinkle on the far shore from Galway city out along the west coast of Connemara.

“She’s the sweetest smile, and the gentlest hands”

Only if he closed his eyes for a minute, or more, then opened them, could he see that the sky had dimmed further. But whenever he closed his eyes, so many thoughts argued for attention. Better to stare at the outside. Tourists walked the pier and up towards the village centre. Groups, couples, togethers. The light slowly fading.

“And I love the ground, whereon she stands”

He’d follow them soon, up to the village and continue on out the narrowing road with a flashlight blinking, to the tent on the pier.

John Rufus Clancy tried to get a proper helping of deep dreamless sleep, but he failed. He’d forgotten how damn loud everything was and whenever he slept, restless dreaming. A rookery in the trees over the main road had settled but not settled, and every so often a chorus of kak-kak-kak-kak-kak skrrrrrrrraaaaukkkk sounds would jar him awake. At two thirty a group of drunk people passed, loud, shouting, laughing. Someone lagged behind and got sick on the roadside. “Timothy” they yelled up ahead. “Are you getting sick?” Did they see the bike, the tent? Should he go out and check?

Then, before seven am, he woke from a dream where he could hear an old cat getting sick in a kitchen, and as the sounds got louder, he struggled to break out of it, urging himself to wake, wake, wake, squirming in the tight sleeping bag as though he were bound up in ropes. Eventually he dragged himself to the surface, and unlocked consciousness, and the sound resolved into the lapping of the high tide on the old pier stones a fistful of metres away.

When he figured that the water wouldn’t rise as far as his tent, John scrambled back inside and lay down and listened to the lapping and tried to let everything else down too, and tried to stop holding things at all. He figured he was making some progress too until the phone pinged, and it was from her or it was not from her. It was on the line between not late and late and here and not here, and somewhere in the story, maybe the beginning, maybe the end, and it said

Or maybe there was no message at all, and outside the sea just glooped between the stones and he could see a squadron of earwigs scrambling up the inside of the flysheet and he had nothing to eat for breakfast and he had failed to make provision for these eventualities at all.