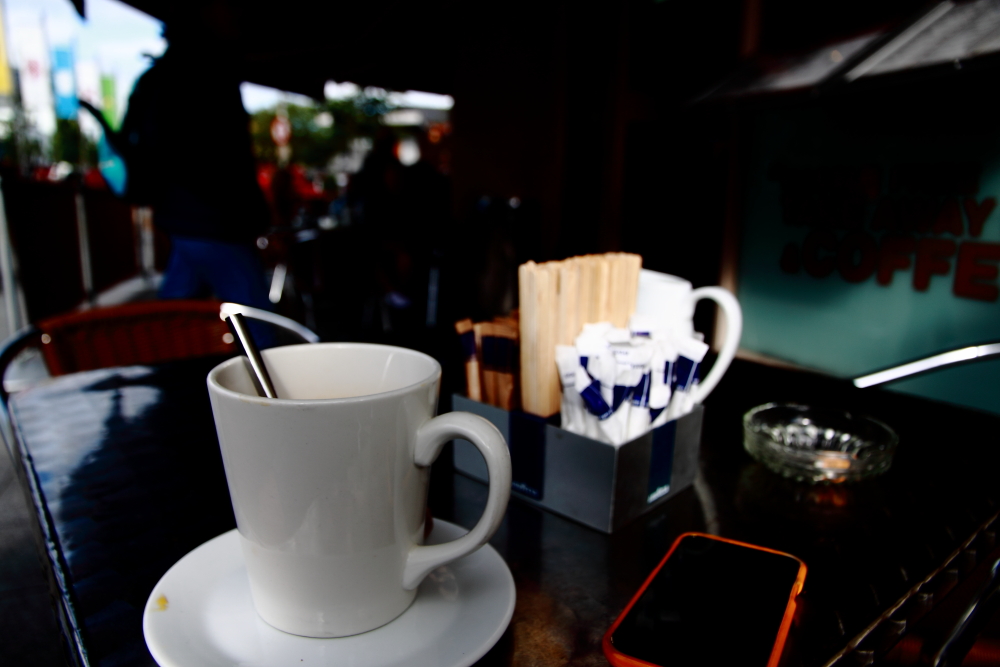 Burgundy. Cabernet Sauvignon. Merlot. White, red, rosa, bubbly. Brian bought 500 grams of dry fusilli pasta in Dunness Stores before going to the Dole Office to sign on. He should have gone earlier; it was overflowing when he got to the doors. Now he was back outside looking at a display of wines through a pane of clean glass that reflected all the way back up St. Augustine street. He shouldn’t have paused. So long as you are moving you exude a sense of destination and purpose.

Brian had already checked his watch seven times and his phone twelve. There were no beeps or alarms or missed calls. But when he stopped for more than a few seconds he couldn’t help but go through the motions. So long as he didn’t stare into space it was possible he still might have a place to urgently go or a vital message to check or need a second to choose how to portion his precious time among many worthy options.

Between left index finger and left thumb he had clamped the queue ticket. The machine in the dole office had rolled it out with a whine once he figured out which of the three buttons to press. All of the seats were taken so he had searched for a clear stretch of wall or pillar to lean against. From the pillar he had listened to the numbers being called out by the officious recorded voice and watched the glacial progress of the dense crowd: a young mother trying to pacify three restless children; two young guys with moody lowered heads in hoods; a middle-aged man with a faded corduroy jacket; a girl with headphones and plimsolls at the ends of skinny jeans looking out of the windows. In the dim light the dense group waited and listened and kept a low-key order.

“Ticket number one hundred and twenty-four to counter number nine”

A heavyset man raised himself with effort and pulled his shopping bag from the floor, leaving a vacant seat. Brian stood close by but didn’t budge. He looked at his ticket and then at his watch. Two hundred and sixty-eight. Eleven thirty-four. He really should have gone earlier; lined up outside before the opening of the doors. He really should have a job and be at work, busy turning some little wheel of the ocean of little wheels that keep the whole show on the road. Now the simplest things were hard to justify. Why is the taste of food affected by the slightest weight of mood? Brian tried to remember Bertrand Russell’s unromantic view of work from a half-forgotten lecture:

What is work? Work is of two kinds: first, altering the position of matter at or near the earth’s surface relative to other matter; second, telling other people to do so.

Stepping back out in the sunshine was startling. The narrow streets seemed impatient for his feet. They slipped along of their own accord, cobbled treadmills. A light salty breeze blew in from the sea, whose tides lapped out of sight behind the apartment buildings along Merchant’s road and the docks. Morning was done, day was winding out and on. If it wasn’t for those pauses he might have been on his way somewhere important. But he was still in the queue, waiting to sign on, number clutched in his pocketed hand. Eventually he let it drop into the small collection of loose change and receipts for pasta and tea and a lifestyle magazine.

There was time for food but Brian walked up one street and down the next on an empty stomach until he couldn’t avoid retracing steps. He glanced at window displays and their reflections, peered into their wares, followed the gaits and graces of passersby, caught snippets of their conversations, noticed their bags and brands and faces and walking paces.

Eventually, like a spun coin he came to rest, at an outside table of a cafe at the corner of Eyre Square, where flags of the fourteen tribes of Galway ruffled over the edge of the park. A horse and carriage stood waiting opposite the tourist kiosk. The horse had its head wedged deep into a nose bag and chomped. A rich medley of accents flowed up and down towards Shop Street: thick Connemara Irish, high-pitched Japanese- now a noisy gaggle of gregarious Spanish students wearing matching yellow backpacks.

Brian checked his phone again as he went through the menu. Coffee would give him energy, but for what? His forms were filled and signed and ready to be checked, his day was ebbing away in an idle agenda. Yet like every day for everyone, bounded by food, sleep, maintenance and upkeep.

When the chirpy waitress spotted him and came over he ordered a tuna sandwich and Americano. At the next table two men and a woman were finishing their coffees and talking about money, marriages, and the price of houses. Relaxed in tidy suits, comfortable in their lunch break banter, Brian had narrowed them down to banking or insurance when the beggar approached.

He emerged from the passing crowd not unlike the way Brian had paused at windows, as though some force had plucked him out of a current. Ragged redgrey beard, puffy brown weathered skin, loose old sports jacket, short squat fingers, faded blue tattoos behind worn stubby knuckles. Brian didn’t catch the first muffled request for money but one of the men slipped out of the group’s conversation to say “Sorry mate, not today”.

Something made the begging man stay. He repeated his entreaties to the others one by one, stepping closer and leaning against the table. Their conversation disintegrated.

“I said not today”
“Just a couple of euro for some food”
“Do you mind? We’re trying to eat our lunch in peace!”
“Sure I just want some lunch too love”
“Yeah? I can smell the drink of ya! Leave us alone will ya? Go beg somewhere else”

Lunchtime peace shattered, the intrusion sprouted hostility. The security of outdoor tables was called into question as a wave of uneasiness spread out from the confrontation. Other diners began to look abstractly away but pay close attention. Their pupils narrowed and heart rates rose slightly and their movements became forced. The beggar now snarled. “Look at ye! I hope ye have a life like mine- the worst kind of life.” Then suddenly he reversed and shrank back, and held out his hand. “I don’t mean you any harm, shake my hand. Will ya shake my hand?”. After an uncomfortable pause and stare at the outstretched hand, it was accepted limply, but a low addition from another, “Make sure you wash them now” brought out another twist of anger.

So it went for a minute or two. The beggar flipped from direct nastiness to apologetic gestures, while the group, long since committed to ignoring or getting rid of their assailant, battled to restrain their tempers and tones. Pitches rose and faces flushed. “This is a welfare state! I pay my taxes! Everyone is entitled to a meal and a bed! No, I’m not shaking your hand.” A cafe waiter tried to get the man to leave but instead he shuffled a few yards and returned, this time to Brian’s table, close enough to share a smell of stale beer and disrepair.
With averted eyes and muted gestures Brian reached into his pocket and awkwardly handed out a two euro coin, getting a thank you and a tattooed hand on his shoulder. He stayed in his chair and focused on his coffee cup until calm returned.

The risen tide of lunchtime groups retreated. Streams of passing people continued up and down Williamsgate Street. The sun came out and the patches of grass in kennedy Park dried enough for people to sit. A wino slept in the warmth on a bench next to teenagers kicking a football. Brain checked the progress of the afternoon on his phone. Two ten. Two hundred and sixty-eight.He wondered who two hundred and sixty-nine was. The machine must still be rolling out numbers, its button faded from the pressing of infinite unemployed fingers. A gust of fear blew sharply through his unemployed interior, which felt suddenly hollow. Formless, jobless, in flux. Who owes whom? How does it keep meandering on? Every life spilling, eroding, wearing, growing, backing up behind disruptions and into cracks and through tight narrow bends and eventually tricking on again and falling forward, drop by drop… Was this town really a graveyard of ambition, too comfortable and walkable and visited and prone to grey misty days to foster urgency and success? He rested his eyes again on the river of moving faces and crumpled up the ticket with the discarded napkin on the empty plate. His body seemed distant, his mind a dreambound pilot fighting to awaken, in control of a moody vehicle from a long way away, bidding it to stand up, breathe, walk inside to the till, hold the door for a couple on their way out.

The chirpy waitress smiled as he paid. Her dark darting eyes were brown and a loose strand of wavy hair fell over her face. “Was Everything o.k.?” She asked, her eyes tilting up with the smile. “Sorry about that guy. He’s so hard to shift!” The coffee machine let out a hiss of steam. “That’s ok. what can you do?” Brian had fallen back into first person, living in the brimming details, catching the trail of darting dark eyes, lingering awkwardly, dropping two euro into the jar marked ‘Tips’, deciding that tomorrow he could queue, that it would be something to do, and walking out between the chairs into the tide of people all going somewhere.

Donal Kelly, August 2013. Trying to be more consistent and follow one effort with another in the hope that something will stick. It seems that a good story is, no more than a good joke- easy to perceive but cursedly hard to invent. Does it take a certain kind of person to think up a new joke? Do you have to be a joker? Can you stumble upon one by accident? Who starts chants at football matches?

Yet maybe drama is not always necessary, action not always vital, and the growth of some fresh edge or digging claw enough to set a frame and get to the thick of a scene.