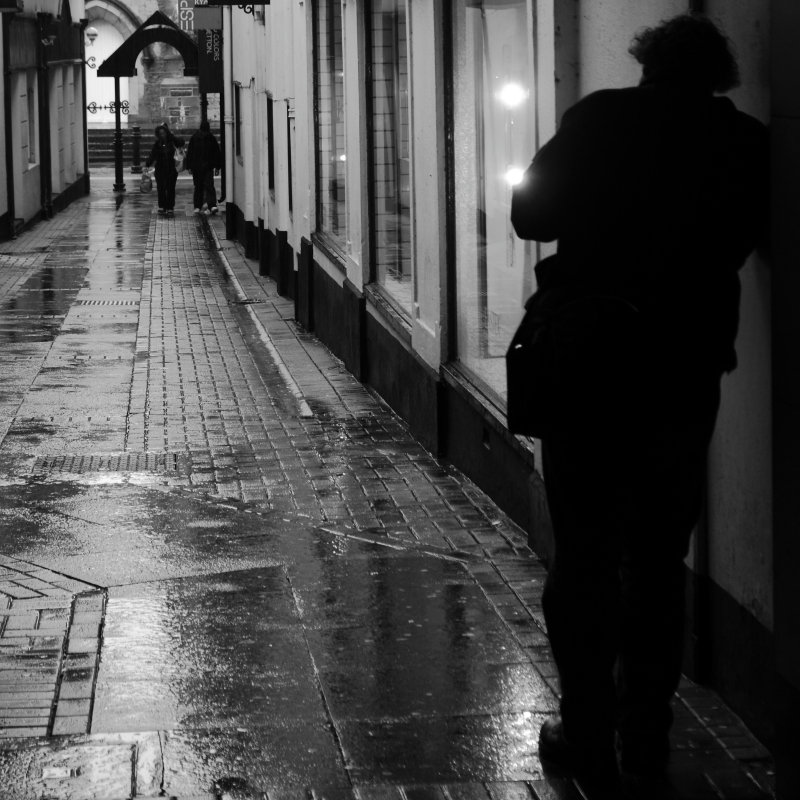 Jamie works in one of those offices down on Abbey Street. It’s a call centre or something: the European office of some American tech company. Anyway he’s been there over a year now. Most of his gang are in Australia, though Tommy O’ Rourke is home next month. I’ve been living with him since he moved out of the place down at the docks. He’s a sound guy, though I don’t know him that well to be honest.

Anyhow, he spends all day at work on the phone or on the computer. Half of the time he’s on Facebook, putting up random links and fishing for likes- the usual shite. But he’s a bit serious now, has a streak in him. Nothing nasty but… it doesn’t take much. I don’t think he likes the job, but who does? Sure isn’t work what you do while you want to be doing something else?

Well there’s another guy in his office from the same village Jamie grew up in; another culchie head. They were practically neighbours but there’s no love lost between them. It must go way back, to some primary school row, or an under twelve GAA fight; you know the carry on. There might be something older: a family feud or something. If one met the other in Timbuktu he’d cross the road and look the other way.

So this other guy is a real Facebook addict too; can’t tie his shoelaces without telling the world about it. Isn’t it mad how we’ve all become OCD about checking something that didn’t exist at all a few years ago? Jamie reckoned this fella went to Spain just to get a better profile picture. Sure it’s hard to know what it all means nowdays. You share nothing and people think you hate yourself or do nothing. You share too much and they think you’re full of it, or too insecure to just let life be lived. We’ll all be buying books soon about how to let it go and live in the moment, whatever that is. Didn’t my aul wan buy me one for Christmas? “Getting to Now”, it’s called. I read about five pages.

Sorry, I’m going off on a tangent. I was telling you about this bad blood. You see, Jamie sneaks over to this guy’s computer during lunch and makes changes to his Facebook the odd time. I told you he had a streak. He told me about it one night in here when we came down for a few scoops after work. He keeps it real subtle, small thinks hard to notice, like commenting on strange pictures and adding odd friends. I think he changed the guy’s birthday and ‘de-friended’ some of his best friends and stuff. He was really proud of it. He reckoned he was some kind of psychological secret agent, wreaking the head of his enemy. Sure we all do the same stuff, but normally to our friends. The closer the friend, the more you can get away with! But that subtle stuff, where you’re hiding your tracks… that’s a different style altogether. You know, it’s all about hiding your intentions, or allowing yourself the space to make it out to be a joke. There are fine lines being drawn up all the time; new etiquette needed now that us monkeys have come down from the trees and are up all night spectating on each other instead.

Sorry, sorry, you know I get carried away after a few pints. Jesus I should get rid of those books. To cut a long story short, Jamie was in awful bad form this week. I think he had a row with his girlfriend at the weekend. He went to lunch early yesterday, and when he got back he snuck over to yer man’s desk, , as usual still logged into Facebook. He starts liking a few dodgy groups and sends a message to a total stranger, and God knows what else – I only know what he tells me – and then up pops a message. Right then and there, and it’s from his own girlfriend, and it says something like “C U @ 5 so?” So he must have lifted off the chair, and before he has time to look again he sees the fella coming back into the office. So he ducks out of the cubicle, and I can imagine he was falling over himself getting back to his own desk. Sure when he came home from work he was still white as a sheet. I had to ask him what was up; I thought he was sick or something. His head must have been going a mile a minute. I was like an old granny making him tea and calming him down.

He told me he rang his girl but got no answer, and I got the impression that he tried to follow that guy after work, but he must have lost him. He was totally convinced there was something going on, but how can you know? That was how he went- no half measures, bit of a drama queen. I think he must have gone for a drink. He might have gotten on to her later but I was out training with the Astro-Turf team so I don’t know. He left early today for work, but he sent me this message a few hours ago. We normally meet up here on Friday anyway, but hard to know today. Here, look: “Know now, see u later”. He’s normally the first one here, but it’s after nine now and no sign.

Like I said, it’s a weird one. I hope he didn’t go off and do anything stupid. Funny fish. Anyhow, Your round is it? I know you’re good for it. Same again for me. Hey, what’s that on the news? Is that…? Hey, turn it up would ya?

**************
Donal Kelly, August 2013
Had a go at a first person perspective, let the narrator be a local guy in a local pub telling a story to his mate about another. As usual I have no idea if the end result is any good, though it was interesting to try. It's amazing how different our written speech differs from our spoken. It feels sometimes that how we speak is a pale mistake-ridden version of how we write, but speech is a lot older than writing, and is so much more efficient and context-aware. Speakers use shortcuts and omissions and smatterings of slang and pauses filled with ums and ahs and a 'protocol' for managing question-response, etc etc. With dialogue you have to get the story across in the voices of character, setting the scene without being able to jump in and out of descriptions of mental states or directly describing the setting.
Making the narrator an actual character also forces you to be more aware of the role that a narrator has, always present but often stripped into an objective know-it-all. More food for thought!

2 thoughts on “Short Story: The Frape”