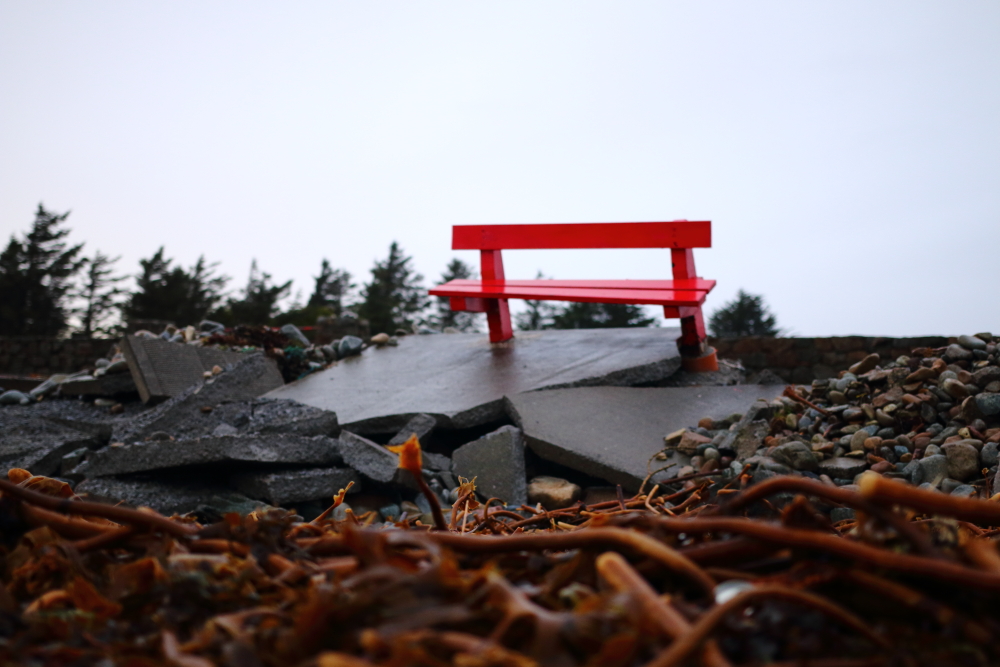 “It’s the wrath of God!” cackled wiry old Mrs Deacy with a smack of her stiff walking stick on the linoleum. “Settle down please, Mrs Deacy,” said Frank McDonagh. “It’s the same spring tide as every year, just coincident with a severe low pressure weather system.” Mrs Deacy persisted. “It’s the Good Lord’s way of showing us our moral corruption and lazy decrepitude.” “Settle down, Mrs Deacy” pleaded Frank McDonagh again. Rush Levins piped up. “Global warming, sure the Earth is fecked”. “Headlong to an amoral hell” said Mrs Deacy. Rush Levins was getting excited too. “The rest of them will get roasted and we’ll just get more water, more wind, and more winter!” There’d be no stopping them now. The hasty call for volunteers to survey the flood damage could go on for hours, at least until Seamus Kerins would inevitably lose his righteous temper and shake them into submission with the furrowing of his fiery eyebrows. I looked across at Tom and gestured my head towards the back door of the island’s tiny primary school. He nodded. Leaving the theorists to their rival interpretations, we each sidled carefully out of our seats, kept our heads down, held our breaths, and edged across the classroom. “Hey! Ye’re to blame!” cackled old Mrs Deacy after us from back in the classroom as we gingerly opened the door, which was eagerly caught by the blowing gale and slammed squarely back into the frame behind us as we fled across the yard. There was a dawn of untold damage to explore.

Down on the beach, the beach was no longer. Most of the sand had been hauled off, surely to somewhere warmer and more deserving and flecked with bronze bikinied girls on sunbeds reading modern novels. It had been replaced with a wild mess of greybluegreen stones and layers of dishevelled yellowbrown wrack. The small dunes that had for all our summers run up to the grass under the fences on the banks were missing, presumed dead, gobbled up by the hungry waves. “The worst flooding since 1949,” the newspaper had said. “Class!” was what Tom said, and we appended further impressed exclamations as we zigzagged up and down the blitzed shore towards Roche’s point with the wind and surfsound in our ears. “Mad!… Nuts!… Unreal!… Deadly!… Insano!” Sections of the beach road had been ripped up. The steel rails at the end of the road were torn from their bases. The benches past the car park were buckled. Cullitys’ field was filled from wall to broken wall with a pool of orphaned seawater. What power! What fury! The two empty holiday homes close to the point had been properly vandalized by the ferocious surge, despite the sandbags piled up against the doors: much worse than even our most ambitious graffiti.

As the storm damage investigation committee from the school finally began to gather behind us along the remains of the beach, we hopped out closer to where the tide had recently retreated. Big rollers still crashed out beyond the point: there would be another high tide again in the evening. Tom spotted the strange shape first, and darted off towards it. It looked like a giant lumpy football encased in a hundred years worth of winkles and seaweed. “What is it?” I gasped as I caught up with him. “Must be treasure!” he gushed. “From one of them Spanish ships that sank hundreds of years ago!” “Maybe gold!” We began to rip the seaweed away and hack at the barnacles. They were stubborn: Tom picked up a rock to belt them with. “Hey! Hey!” Old Mrs Deacy was advancing across the rocks, waving her stick. “Get away from that ye devils! Get back! That’s a symbol of God’s wrath for agents of immorality like ye!” We retreated the other way. “Leave us alone you old bag!” shouted Tom back at her. “We found it first!” I yelled. Old Mrs Deacy reached our treasure and swung her stick at it as she straightened up to issue another croaking judgement. With a magnificent mid-sentence pop, she exploded into an enthralling billow of sand, seaweed, crinkly flesh, and jellyfish.

Week Four of the Creative Writing Class, with the homework being to write a short piece beginning with dialogue in a crowd. I wanted to include something from the flooding that has beset Ireland lately and had a sudden image of a group in a school on an island having a madcap meeting about what should be done. Then I figured the sea would wash something up, maybe treasure, or something mysterious, or alien, or from the future, or from a science fiction novel. Mrs Deacy was originally supposed to just be in the meeting but she has a set on the two young fellas, and followed them on the beach. She saved their lives- an act of heroic sacrifice! It could be a lot longer but I wanted to fit it on a single page when printing- challenge being to include the whole story within that limit.