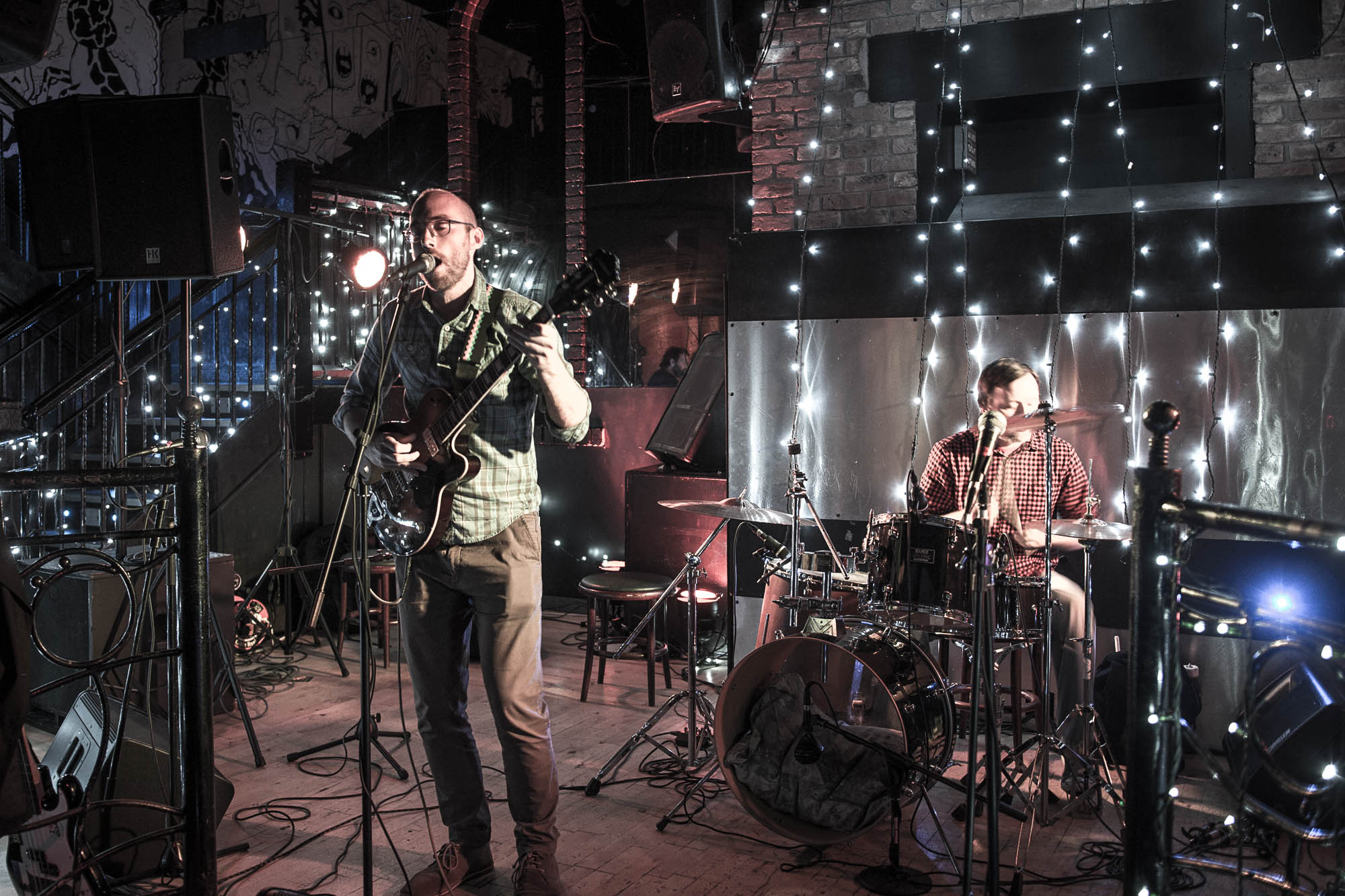 But this isn’t the official Arts Festival. This is the low budget tagalong sibling, raised on handmedowns and shorn of ‘big’ names: the Galway Fringe Festival. Smaller venues, smaller fuss, more variety: trade your big top tent and big-rig logistics for a dark backbar stage where the hit-and-miss of the up-and-coming brew their storms?

The Mountain Man band kick up a big swell for a two-piece outfit. Born and raised in the wild west of Ireland with Gaelic as language no. uno, they nonetheless rock up a bluesyriff thick sound that seems to have done a few laps of the US and come back for a holiday… or a vacation, depending on your ken.

I stuck my Zoom H2n on a stool near the stage, where it decided to nosily listen in on ambient bar chatter, but obliged to also notice the stage output fair square (I had to push out the audio’s intro to avoid a man loudly saying “Red wine is the worst” just as the guitar starts to get into its groove). I started to record, then after a minute the Canon runs into that beloved error: MEMORY CARD FULL
Unsure of whether or not I had definitely definitely uploaded everything lately to the laptop from the jammed 16Gb card, I began to delete old photos, cursing myself for not being thorough. Come next song, I hit record again.

Baby, Please Don’t Go, is a standard so standard that its origins are as smoky as an Irish bar at 2am before the smoking ban. You might know it from Lightnin’ Hopkins, or Van Morrison and Them, or Big Joe Williams, or John Lee Hooker. The Mountain Man Band hit it from the pre-Them slower tempo, but via a moody-muddy electric direction. It’s laid back and jagged.

Now don’t you call my name, you got me way down here, on a ball and chain

Guitarist and vocalist, Declan Keane, has spent a long time working on getting good tones. For this track, he used a De Armond M75T guitar (humbucker pickups), paired with a Laney VC30 210 amp, played through the clean channel (tones low, mid/bass raised a few notches) via a Boss BD-2 pedal providing some overdrive crunch.

I had the Canon 70D stuck at ISO 1600, and the Sigma at 1.8 in Av, and used a focusing ‘trick’* to get a focused shot or two, and did but a quick edit in Windows Movie Maker for the video. Movie Maker didn’t quite play ball, though, and after exporting had managed to unsync the audio and video tracks slightly. A few tweaks and exports later and… same thing.

I ran the photos through Lightroom, and levels that I had been trying out of late. The temperatures of lights in a gig need some kind of ‘interpretation’; I never really take to how the camera handles them first.

Listen to more of The Mountain Man Band here: http://themountainmanband.com/music.html

To do them justice I should have captured their original songs; maybe ‘Move to the City’ or the lean and mean ‘I Swore’.

I swore that I’d never leave you; you swore that you’d never break my heart