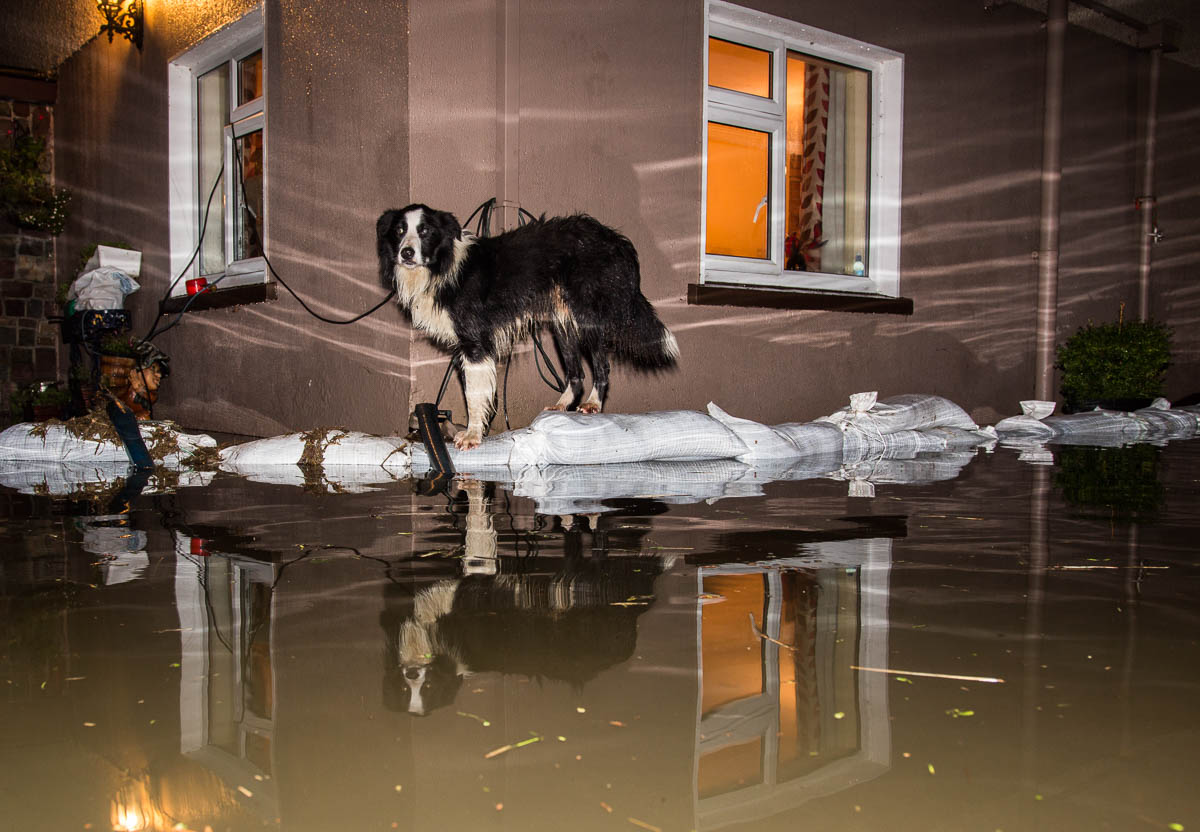 It happened before, though the levels this time are higher. In 2006, for the first time in the history of a family home built almost a century before, winter waters reached the doors and spilled into the kitchen.

Nine years later, after another close scare in 2009, there are four inches of water from wall to wall on the ground floor of the Connolly’s home. Despite the sandbags, the pumps, and the efforts of the local council workers and incredible neighbours, the waters have risen and risen, creeping patiently across the fields, nudging out onto the road, lapping against the stone walls, inching up the drive. There is none of the sudden drama of a swollen river breaking its banks, no ferocious roar, just the slap and slosh of a lake materializing and the farmland descending to its bottom.

It happened before, and it made some papers then, but nothing practical was done. A few meetings of promises made and then nothing. It might be the lack of drainage, as the water in these areas of porous limestone can take its time to get to the rivers and seas, and follow underground paths and build up in low-lying fields. It might be global warming and the unpredictable weather conditions it exposes Ireland to. Rainfall is more concentrated and monsoony, and as in many areas in the last week, the network of rivers and lakes have problems handling it. In any case, the Connollys were left on their own in 2006 to repair, renovate, and carry on living in their warm welcoming farmhouse, all the while wondering if it would happen again. It has. Most frustrating for the family was how what they had been told was a newscycle’s worth of noise, with no actual policy or provision for what to do in the case of a re-occurrence.

There’s up to seven feet of water along the little road after it passes the Connolly’s entrance. During the week, a woman accidentally drove into the depths of it and had to be rescued by the fire service, after Jimmy heard her tired yells when he went to check on cows. She had been in the water for an hour, and was confused and freezing in the pitch winter dark and heavy cold quiet water.

By the weekend the battle to keep the water out of the house was lost. Just a few millimetres first, in the living room, then a small flow into the kitchen, then more and more. The house’s old foundations are no match for the water’s ability to find its way in. The wooden floors begin to swell. Wooden Doors refuse to close. A smell of dampness begins to rise. Soon it becomes a sharp unsettling odour, almost as unsettling as having to wear high waterproof boots indoors, and hearing the constant slosh and drip of water moving. Pumps were brought in but merely postponed and delayed the steady accumulation. It’s elemental and unstoppable.

Outside, the driveway is under three feet in spots. Just getting to the end of it is a complicated manoeuvre of wellies, waterproof layers, and a choice of boat, kayak, full-length waders, or a swim. The tractor is refusing to start since it ventured too deep into the murk. The cows are mooing loudly from the shed as the water discovers them too. Sileage, turf, hay, are caught and soaked. Grass, plastic pots, lumps of wood, and random landlubber memorabilia float idly by as though on some adventure. Apples, too; one of the old apple trees has collapsed, its roots released by the softened garden. Alfie, the generally water-loving sheepdog, runs up and down along the banks of sandbags, water on both sides. The cats are hiding on roofs and the tops of walls. One of them has set up residence somewhere in an upstairs bedroom, appearing every so often on the bottom steps of the damp stairs to look at the mess below before retreating.

Indoors, a plastic rubbish bin has managed to float from the kitchen to the living room. The stove there is burning away the briquettes that arrived by boat, just a couple of inches above the surface, and in the corner a TV is showing the latest X Factor finale. She’s singing a cover of Bob Dylan’s Forever Young, but does it not seem so very staged and overly designed? A coffee table on top of two sandbags and loaded with mugs of fresh tea tilts oddly to one side. It seems like the deck of a leaking ship, slowly listing, in a still sea. Hard questions are being asked. Do we stay or leave? Where will the cows go? How long can we stick it out? Where will we go? Is it another ‘once-off’, a once-in-a-century flooding event (9 years after the last one), or a recurring winter nightmare?

The idea of the work getting it all back to normality again, with Christmas two weeks away (sorry soggy Christmas decorations have been moved to high shelves) is best avoided for now, while life is still splash slosh splash slosh. Best to focus on the most urgent of questions. How many pairs of dry socks have we left? Eileen remarks how getting up in the morning has become so difficult; putting on knee high boots upstairs and coming down listening for that slosh while wondering how much it has come up.

The night is calm and the stillness of a midnight lake settles in. At least the lights are still going. Hopefully the switches won’t trip before the morning.