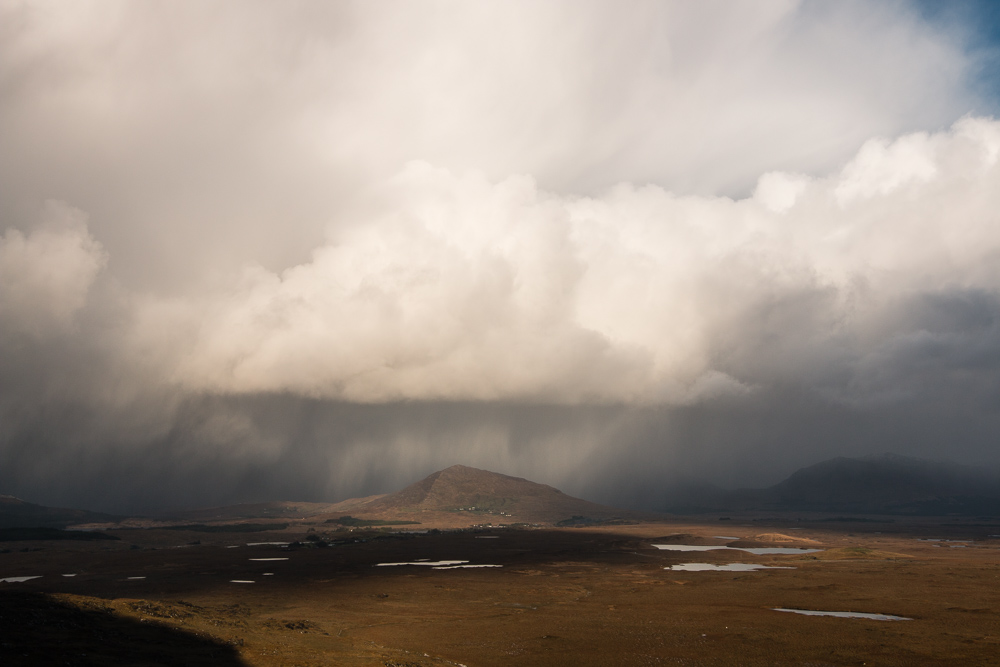 I’m hunched down under a little umbrella, my back against a rock face on the mountainside, and through drumming hail sunlight beams from under a turreted and tendrilled bank of Atlantic cloud.

Cold. Fresh. Soft. The loft-frozen pellets hop and bounce down the rock face. Pile into little lines and bumps and begin to whiten the ruddy earth. Bounce and hop but then suddenly seem to turn weightless, replaced by scattering petals of snow. Colder still. And then traditional rain joins in, heavy and steady and wet and I crouch deeper under the little flapping shelter.

Fickle winter weather, and a churning mess of cloudmass from the west in slow waves. I came up from the church car park, up the steep pitch of narrow road to the old graveyard. There the exposed hillside tombstones rest on a much older formation, old enough to be the area’s namesake. This is Cashel, from the Gaeilge An Caiseal, a name for a ringfort. These would have been built in the bronze age, which goes back some 3000 years. But this ringfort now sits under the high Cashel graveyard. Clumps of unmarked stumps mingle with rectangular marble and granite slabs and plastic flowers and crosses and bordered beds of gravel.

I notice a tall narrow headstone with a different style

A full run of 20th Century carnage: in a weathered Connemara hillside graveyard built in a weathered 3000 year old fort, lies a Nee who fought in the American army, probably on some blood and mud dug trench in France in the Great war, during which Ireland itself kicked off an uprising against British rule.

3000 years of cloudchurn and yet so quiet and unperturbed. A herd of small sheep with red and blue markings line up behind a gate watching me in hope of feed. An abandoned big house half submerged in a copse of leafless trees. A line of electricity poles lead from its gable back down the hill, the wires long gone: must have been in use after electricity arrived here in the 1950s. Here is a land with abandonment sewn into its definition. More goings than comings. As basic as the acidic soil where the roots of civilising crops are loathe to tunnel. Leave it to the mosses and grasses and layers of sodden peat. Here lies ties to centuries of roaming and fighting and big thick lines being drawn and redrawn on history maps. And yet just a flock of sheep chewing and staring at a gate under Cashel hill.

Higher up, I think about turning back, but the sun pops out again, and I clamber to the summit. It’s not high, just a little over 300m, but is unobscured and panoramic. Straight east huddle the basket of Bens and south of them over the Inagh valley and Recess, the broad Maamturks, and then beyond that Maam, Derroura, Oughterard, and the Corrib. Lakes pocket the bog. Dense conifer plantations in dark green patches. The higher peaks are dusted white, and over them all a canopy of shifting clouds spilling hail, rain, snow. You can make out distant blades of Cloosh wind mills spinning a little more west, and as you spin further that way, the flatter fragmented bogs and scattered houses of gaelic south connemara, from Carna down to Lettermore, Gorumna, and Carraroe and then on towards Galway, hidden now by cloud or slope or both.

Still turning, now facing into the sun as it approaches the Atlantic lid somewhere over the Aran Islands. Just below, the sea negotiates a series of complex bays and inlets. There’s something Escher-like about the one and the other. Perhaps the bog is the bay and the bay the bog? The ocean is boundary, limit, barrier, but yet passage, potential, murky and laden. Further north, the other lonely sisterpeak of Errisbeg over Roundstone, and past that the clouds sitting thicker and opaque. Another band rolling in.

The wind is howling again and flecks of new hail begin to patter, even while light still pours. There’s no scrap of shelter here, so I don’t wait beyond trying to stick something of the place into a digital sensor. Snappity snap. Then I flee back down towards the sheltered slopes and crouch under another rock face when the soup gets thick. The umbrella buckles. A dial cover is missing from the camera. Losses. I track back down by the graveyard and its layers of stones and story and down the hill to the car across from the church. Its wipers have been acting up, but they twitch into life now first time, and I pull out onto the road for home.

Why climb a hill at all? There might be a point. There might not. Is it not all self serving in the end, and the self not a thing at all?

“We’ll climb that hill, no matter how high, when we get up to it.”